The ads, starring Malgosia Bela, Liu Wen and Cara Delevingne, are part of a strategy to revamp the Italian lingerie brand. 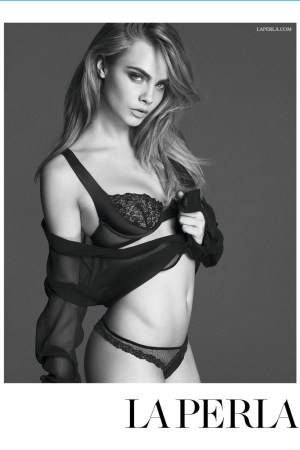 Nathan Sports Branching Out Into Apparel

SHENZHEN — La Perla is launching a new advertising campaign featuring models Malgosia Bela, Liu Wen and Cara Delevingne in pieces from its spring-summer 2014 collection, as part of a strategy to revamp the Italian lingerie brand.

After floundering financially, La Perla is looking to regain its footing. In June, La Perla was acquired by SMS Finance, a financial services provider owned by Silvio Scaglia, an Italian telecommunications entrepreneur, for 69 million euros, or $90.3 million.

The company now wants to “reset” its image as a luxury brand, said Jean Emmanuel Bourguet, vice president of global commercial operations, outlining a three-part strategy that includes the ad campaign, redesigned stores and a renewed focus on design with bespoke services and upgraded customer service.

Shot by Mert Alas and Marcus Piggott and directed by Fabien Baron, the campaign will be featured in the January issues of top magazines worldwide, Bourguet said.

The concept will be rolled out to between 10 and 15 of La Perla’s existing 150 stores worldwide in key markets such as New York, Paris, London, Hong Kong and Milan, and will also feature in new stores, mainly in China.

“Chinese women, when they think of lingerie, they still tend to think of the functional side, so it’s an educational process,” said Miriam Bray, La Perla’s Shanghai-based managing director for Asia Pacific.

“We are looking into possibly having an ‘Asian fit’ but at the moment, there doesn’t seem to be a difference. I think it’s more of an educational process — it’s about changing women’s mindsets,” she added.

Bray said there is also some education about how to wear the pieces — a corset, for instance, could be worn with jeans to go clubbing at night or with a trouser suit for work.