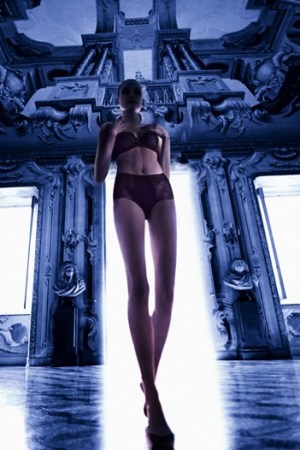 The new collection forms part of La Perla’s strategy, which includes a return to its core business of corsetry with timeless pieces and perfect fit, but updating the collections to make them more contemporary, with innovative techniques such as laser-cut lace.

“The Villa Toscana imagery and concept were actually part of La Perla’s archives,” said chief executive officer Alain Prost, speaking at the 16th-century Villa Le Maschere here, which is now a five-star hotel. The company took it over to unveil the new strategy.

“The easy, casual-chic style of the Villa Toscana collection caters to a new, aspirational customer who wants to be part of the La Perla lifestyle,” he added.

The same pastel color palette and flower patterns run throughout the collection of innerwear, beachwear and loungewear, which includes linen and cotton shirts and drawstring pants.

Villa Toscana will be one of the firm’s three main labels going forward, with the other two being La Perla and La Perla Studio. The aim is to streamline a somewhat confusing number of brands that were spun off over the years.

The Black Label, Limited Edition and Bridal labels will be integrated into the premium La Perla franchise; the Anna Club, Aquasuit and Joelle brands will be absorbed into the Villa Toscana business, and the original La Perla Studio, Malizia and Glamour names will be folded into the La Perla Studio operation. The latter will revolve around more minimal and easy-to-match sculptured looks. Occhi Verdi, as well as the men’s Grigio Perla and exclusive Nero Perla brands will continue to function separately.

Creative director Giovanni Bianchi, who has worked at the company for more than 20 years, will continue to oversee designs for the three labels, which will bow for fall 2010 with a preview to be launched in April. La Perla should account for 40 percent of sales, as it currently does, followed by Villa Toscana with a 35 percent share and Studio making up the rest.

As for their positionings, the company means to lower price ranges by about 25 percent, with bra and panty sets by La Perla retailing at 200 euros, or $300 at current exchange; Villa Toscana coordinates being priced between 100 euros, or $150, and 200 euros, or $300, and Studio selling for below 100 euros, or $150. Prost plans to achieve this by manufacturing “less, yet better, products,” taking more time to perfect each piece.

La Perla recently had focused on more fashion-oriented items, losing its vision and expertise on fit, according to the company’s brand consultant Frederic Loebb of Loebb Innovation, Paris. “There were beautiful products in our windows, but remote from our customers and conveying the message that they were designed for top models’ bodies,” said Loebb.

To exemplify the relevance of fitting, Prost said the company is closely working with some of its partners, including Nordstrom, fine-tuning the products to make sure this will no longer be an issue. “We are going back to what Ada Masotti [who founded the company in 1954] used to do: cutting and stitching for real women, understanding women’s bodies,” explained Bianchi, who said timeless pieces once again will be significant in La Perla’s business. “Fashion pieces currently account for 90 percent of sales, but we want to reduce this share to about 50 percent, to stimulate brand loyalty in our customers.”

The American market, which accounts for about 15 percent of sales, is especially relevant for the company, now owned by San Francisco-based private equity firm JH Partners. Prost said the firm, which took full control of La Perla at the end of last year from the Masotti family, is focused on a long-term strategy. JH Partners recruited Prost from the Chantelle Group in March. A sign of the tough times, 400 of the firm’s 1,200 employees in Italy are being partly supported by government funds. This procedure allows La Perla to avoid letting those workers go and will be effective until 2011. Prost said it was important to keep production in Bologna to preserve the brand’s craftsmanship. To help lower prices, some detailing for the Studio line will be produced in La Perla-owned facilities in Portugal or Asia.

This year, the company is expected to post earnings before interest, taxes, depreciation and amortization of 10 million euros, or $15 million, up from 6.5 million euros, or $9.5 million at average exchange, last year. The company generated sales last year of between 150 million euros, or $225 million, and 160 million euros, or $240 million, down 10 to 15 percent from 2007. Declining revenues were attributed to the challenging economy, a strong European currency and difficulties in the wholesale channel, which accounts for 60 percent of sales. Prost said he expects a 5 to 10 percent rise in revenues next year. “We’ve seen a growth in spring-summer orders, a first for some years now,” he said.

While investments in advertising are frozen, the company is expanding its retail network with a boutique opening in Malibu, Calif., this month. Openings in Asia are next. There are 60 directly operated stores and 40 franchised boutiques. The brand also is available at 2,500 points of sale. Exports account for 55 percent of revenues.