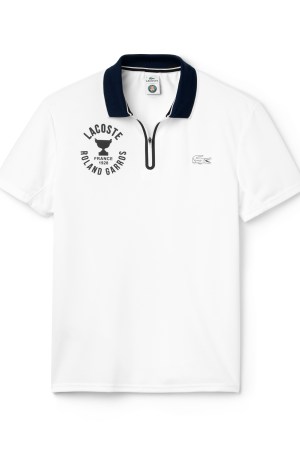 As the French Open gets under way May 16, Lacoste, a longtime partner of the tournament, is unleashing a new co-branded Roland Garros capsule collection for men, women and children. The line will be sold in select Lacoste boutiques and on lacoste.com.

The collection, inspired by the graphic lines of a tennis court, combine Lacoste’s signature petit piqué with jersey in a navy, white, gray and turquoise blue color palette.

For example, Rene Lacoste’s silhouette can be seen on a men’s navy sweatshirt that says, “Silence, s’il vous plait,” or on a white T-shirt, while a navy polo shirt with white edging on the collar displays the tournament’s trophy. As part of the capsule for women, a grey and white striped sleeveless polo shirt, a turquoise and white striped T-shirt and a navy and white striped polo dress display the trophy.

The line also pays tribute to René Lacoste, five time singles and doubles winner of the tournament. Roland Garros was built for René Lacoste and the French team known as the “musketeers” to defend their Davis Cup title.