In the latest in a string of deals, Gwen Stefani and her label have entered into a collaboration with the lingerie and thong specialist. 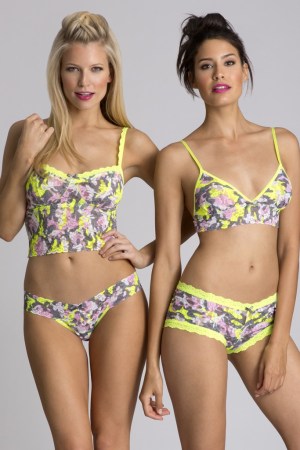 The exclusive, music-inspired collection will launch worldwide at major department and specialty stores as well as on hankypanky.com in July.

“Hanky Panky makes amazing product, and combined with some classic L.A.M.B. prints and designs, we’ve come up with my dream collection,” said Stefani.

The line, which has been designed and created by the L.A.M.B. team in conjunction with Hanky Panky’s New York-based studio, includes four groups based on Hanky Panky’s best-selling styles:

• Geo, an edgy, vintage-inspired print in pink, rose, beige and black. The group includes a number of Hanky Panky’s most popular styles, such as a soft bra, a boyshort, a cami and barely there thongs, but features L.A.M.B’s embellishments of lace and black accents. There’s also a sexy, fitted teddy.

• Lambie Camo is rendered in camouflage printed lace in florescent shades of pink, gray, white and neon yellow. Styles include a bralette, a hip-cropped cami and retro-looking thong, boyshorts, G-strings and a variety of top-selling thongs.

Suggested retail will be $23 for a printed G-string to $86 for a chemise.

Epstein, cofounder and creative director of Hanky Panky, said the collaboration made sense because “both companies were founded on vintage references and embody empowerment and femininity.”

A wholesale sales projection was not available, but sales of the capsule line could exceed $3 million the first season, according to industry estimates.