First collection bearing the Laura Ashley Intimates name will be unveiled at the May innerwear market in New York. 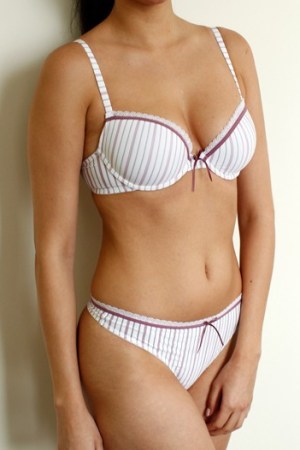 Distribution will be aimed at major specialty and department stores and specialty boutiques in the U.S., Canada and Mexico and 400 Laura Ashley stores in Europe, Asia, South America, Australia and New Zealand.

The Laura Ashley Intimates line, which will be unveiled at the May innerwear market here, will be launched for fall, while the Laura Ashley London collection will be introduced at retail in early 2012.

“We are finding that the plus-size customer is having trouble finding fashion colors, prints and styles in plus sizes. So, we feel it’s important to accommodate her,” said Walter Osband, vice president of marketing and sales for Secret Lace.

“We are using a lot of novelty microfibers, shadow stripe effects, yarn dyes, jacquards and laces that are exclusive to Laura Ashley, as well as elastics that are very thin, comfortable but still strong enough to hold a seamless [bra] cup,” she explained.

Regarding the Laura Ashley shopper, Osband noted, “The Laura Ashley customer is a woman between 30 and 50 years old with a household income of $75,000, is educated, well traveled, home- and family-oriented, and shops both in-store and online. Laura Ashley has 88 percent brand recognition [according to Laura Ashley Inc.], and a global presence of over 25,000 retail doors in the U.S., Canada and Mexico.”

Zaccai added that signature prints used in the intimates line will be merchandised to create a cohesive statement with the licensed line of Laura Ashley sleepwear and loungewear.

“We will be communicating with the sleepwear license at Russell-Newman on similar or coordinating prints,” said Seccai.

Secret Lace also produces a line of bras by Black Fuchsia, which is sold at chains including Wet Seal and Mandy’s, and will be launching a collection of young contemporary lingerie called Paris Blues on June 25. Distribution is aimed at department stores.