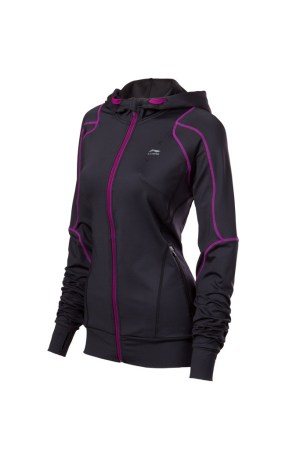 The company, which is often referred to as China’s equivalent to Nike and is the world’s third largest activewear company, officially launched its Digital Li-Ning brand Web site Wednesday with an assortment of men’s and women’s athletic footwear and apparel.

The digital launch, which is headed by industry veterans from the brand management, digital and consumer marketing fields, was created and organized by the U.S. division of Li Ning Co. Ltd. in Chicago, where the Chinese megabrand has had a joint venture with digital marketing firm Acquity Group LLC since 2011.

Since a soft launch in December, the li-ning.com site has garnered a 425 percent increase in unique monthly Web visitors representing a nearly 600 percent increase in daily Web traffic, said Ray Grady, general manager of the U.S. operation. The results have been achieved through a combination of impactful images on the site that “enables consumers to feel the personality of the brand” as if they were in a brick-and-mortar store, as well as endorsements by professional athletes such as Baron Davis of the New York Knicks and Evan Turner of the Philadelphia 76ers.

Grady said the philosophy of the brand and the site reflects the strength and character of its founder Li Ning, who won six medals at the 1984 Summer Olympics.

“Not a lot of people knew much about China in 1984, but he burst onto the scene and became an Olympic hero and a national hero, and he parlayed that into a multibillion-dollar company because he wanted to make sure his countrymen wore Chinese gold medal garments. He’s a very compelling figure and has a lot to tell.…When we launched in the U.S., we wanted to be very respectful of the man and what he’s done with the brand.…We wanted to portray a humble voice but a polished voice and a big brand, a global brand,” explained Grady.

He described the U.S. market as a “huge opportunity” for the 22-year-old Li-Ning brand because consumers want new and different options in sports apparel and other categories. He targeted digital sales as the key portal for a “challenger” brand.

“Consumers want to wear something their peers don’t have. They want to teach and educate them, especially their Facebook and Twitter followers,” said Grady. “We are launching into the [digital] retail landscape at a time when retail is evolving and changing — Gap is shuttering stores while Amazon is wildly successful.…Our target demographic skews younger, Millennials or even if they are not Millennials, they are open to change. We thought we would start off with a very digitally focused company from the first day of business so people could understand it.”

He noted that the number of followers on Facebook has jumped from 100 to 50,000 and Twitter is on the same fast track. The company is also partnering with digital brands and blogs to build exposure for the brand.

“Our approach is candidly what our competitors are trying to reinvent themselves with.…We have a pilot campaign with Pandora and we are currently in talks with other brands.…The brand is also showing up in sneakerhead blogs, a huge [basketball] subculture, and when we talk to the running category it’s a slightly different voice with a biographical, philosophical approach. We are also doing online periodicals like Runnersworld.com,” said Grady.

He added that two campaigns on YouTube have been hits: One features Turner as he recaps milestone moments on his birthday, and another video depicts Davis and his rebirth into the New York scene.

Assessing the potential for the Li-Ning brand in the U.S., the parent company’s chief executive officer, Zhang Zhiyong, said last year that long-term, international sales are projected to account for 20 percent of total revenues by 2018, with half of that coming from the U.S. market.

“We have been very successful in China, and we’re confident that we’re going to have our target audience and market share in the U.S. We have a track record of winning against Adidas and Nike,” Zhiyong had asserted.

Meanwhile, Grady singled out the women’s fitness market in the U.S. as a “very important” segment.

“We’ll be doing a female running campaign online in the next 30 days across multiple channels including e-mails.…It will be about running because we don’t want to just hang our hat with athletes. It’s a huge opportunity for us with natural silks and bamboo [apparel] and the green side fitness apparel like yoga and pilates,” he said.

Regarding other marketing venues in the future, he singled out major events such as the NBA All-Star Game, Mother’s Day and the Summer Olympics in London.

“We launched with an exclusive line and we see the line rounding out.…We’ll be doing marketing events on the ground in London during the Olympics and online in the U.S. as well,” he said.

A first-year wholesale sales projection was not available, but Li-Ning has a market capitalization of 9.57 billion Hong Kong dollars, or $1.23 billion.

During the six months ended June 30, the company’s revenues slipped 4.8 percent to 4.29 billion yuan, or $655 million at average exchange for the period, and profits attributable to shareholders declined 49.5 percent to 293.7 million yuan, or $44.9 million.

The company has been taking steps to revitalize its brand and reform its distribution.