By Khanh T.L. Tran and MAUREEN A. STAPLETON on September 17, 2008
View Slideshow 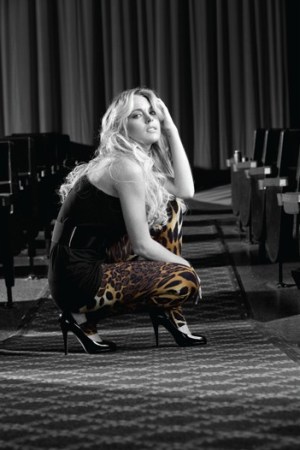 The starlet, whose bouts with drugs, alcohol and the paparazzi have been breathlessly chronicled, is staging a comeback with her own brand development company.

With Lohan serving as the public face and a source of ideas, Beverly Hills-based Stay Gold LLC is developing merchandise under the label 6126. This week, it began shipping leggings for the contemporary market to retailers such as Henri Bendel and Intermix in New York, Harvey Nichols in London, and Intuition, Madison and Lisa Kline, all in Los Angeles.

In addition, company officials told WWD that Stay Gold is testing a natural self-tanning lotion that it wants to introduce as soon as next spring, when it also will launch a lower-priced line of leggings, and follow that in the fall with a moderate-priced accessory.

If the ventures sound eclectic, Lohan dismissed any skepticism of their viability. “Why not?” she said in an interview. “Girls use [self-tanners] all the time. And I do, and it makes sense.”

As for the leggings, which Lohan began donning as a wardrobe staple two years ago, she said, “It became quite a trend with young girls interested in wearing them.…If I’m wearing them, why not wear my own and bring ideas into them?”

In contrast to many celebrities, such as Hilary Duff, who have one brand — themselves — and ink licensing deals with other companies to produce goods ranging from energy drinks to jeans to sunglasses, Lohan opted to start a parent company with Kristi Kaylor, a principal in singer Mandy Moore’s clothing brand Mblem, and Sarah Haynes Heath, a founding member of the Hard Candy cosmetics line. The fourth principal is Jenni Muro, who started a film company, Crossheart Productions, with Lohan eight months ago and is one of her managers.

The partners identify the categories they want to branch into, develop the products and hire manufacturers, such as Montreal’s Manhattan Industries, which produces the leggings.

“We want to make sure whatever is put out under the 6126 brand is touched by us,” Kaylor said. Besides, Muro added, Lohan is “too hands-on” to entrust a licensee.

This is Lohan’s first fashion business venture, said Muro, who estimated that hundreds of companies have approached the starlet for clothing and beauty deals. Lohan, 22, has appeared in ad campaigns for labels such as Dooney & Bourke, Miu Miu, Jill Stuart and Fornarina. After meeting with Kaylor and Heath last year to discuss a separate transaction that didn’t pan out, Lohan and Muro teamed up with the fashion and beauty veterans to start Stay Gold in January. Declining to discuss the company’s finances, the four principals said they are all equal partners working with no outside investors.

Lohan “has a huge amount of exposure [to] many brands and products,” said Kaylor, 36, a former TV producer who had launched an online teen network with Jennifer Aniston and ran Warnaco’s junior swim business. “She knows what is missing from the marketplace.”

What is lacking in the categories of leggings and self-tanning lotions is a dominant brand. Therein lies Lohan’s advantage, said Rick Barrera, president of brand consultancy Overpromise Inc. in San Diego.

“Whom does she have to compete with?” Barrera said. “Everybody knows the whole idea is to find white space where you don’t have competitors who are well-known.”

Heath, 38, who started consulting with skin care and cosmetics companies after handling publicity and marketing for Urban Decay and Smashbox Cosmetics, said the odorless self-tanner is made with natural ingredients based on a formula created by a woman whom Lohan knows. Stay Gold will bottle the tanner to sell to high-end stores “like the Sephoras and Nordstroms of the world,” Heath said.

Lohan and her partners also can benefit from starting a business in the midst of an economic downturn, when firms are retrenching. “You have a whole lot less competition when the market is down,” Barrera said.

Attracting attention is certainly not a problem for Lohan, who started smiling for cameras as a six-year-old Ford model and rose to real prominence in 2004 with the hit film “Mean Girls.” The paparazzi hound her, along with her constant companion Samantha Ronson, the celebrity DJ and twin sister of designer Charlotte Ronson.

This year, Lohan began reviving her acting and singing careers. In February, she sparked Web fervor with her Marilyn Monroe-inspired nude photos shot by Bert Stern for New York magazine. Lohan chose 6126 as her brand name because it represents Monroe’s birth date. She recently wrapped up a leading role in “Labor Pains,” a comedy about a woman who fakes a pregnancy to keep her job, with Cheryl Hines and Janeane Garofalo. When not in the studios recording her third album, Lohan is filming a total of five new episodes for the third season of the popular TV comedy “Ugly Betty.”

A spokeswoman for Stay Gold said Lohan has 6126 leggings on the set of “Ugly Betty” in case they work with her wardrobe choices. Lohan also landed on the cover of next month’s issue of Marie Claire, with two photos of her wearing 6126 leggings in the fashion spread.

As proof of Lohan’s selling power, Jaye Hersh, the owner of the trend-driven boutique Intuition, said she collected 200 advance orders for 6126’s leopard-print ankle gloves. She said the starlet’s fans span in age from 13 to the late 20s. “The girl wants to look like Lindsay and have her style,” she said.

What’s more, unlike some celebrities-turned-designers who don’t deign to wear the clothes bearing their names, Lohan wears her leggings. Retail prices start at $44 for ankle gloves and run up to $160 for a Modal-cotton style accented with black quilted leather patches on the knees. Muro said the leggings are fitted on a model and then on Lohan, who is a size XS. Once, Lohan tried on samples in a restaurant’s bathroom, advising her partners to lop off an inch from the waist so that the leggings sit lower on the hips. She also ordered Muro to “pull polkadots” from a textile print studio for a forthcoming collection.

“You can see she’s not just slapping her name on something,” Hersh said. “That will make a huge difference in the way that [6126] is accepted on the floor to the end user.”

Celebrity aside, one lesson that Lohan and her partners learned quickly was how to steer the company through economic turmoil. Stay Gold will launch a second line of leggings retailing for $48, or as little as one-third of what the core grouping costs, for next spring. Despite her penchant for luxury labels such as Chanel, YSL and Balenciaga, Lohan stressed the importance of offering something affordable to shoppers.

“It’d be unfair not to make it accessible for everyone,” she said. “Forever 21 and H&M are huge companies because they make it available to everyone.”

In addition to lower prices, consumers want a connection to the products.

“The big word in marketing today is ‘real,’” said Marc Gobé, president of Emotional Branding, a New York-based think tank. He noted that in a celebrity-obsessed culture, people are forgiving of stars like Lohan who don’t project squeaky-clean images.

“She represents a kind of unconventional lifestyle, but there’s personality to it,” he said. “She can have a Web site and talk about all those challenges. What is important is to create a community, and the advantage of being a celebrity is to create a community of advocates who want to have you as a best friend and write to you.”

Certainly Lohan, who is pledging to donate some proceeds to ovarian cancer charities because Muro, 32, is a survivor of the disease, advocates an inclusive view of marketing her merchandise.

“It’s available to anyone and everyone.…It’s an important thing for girls to know,” she said.