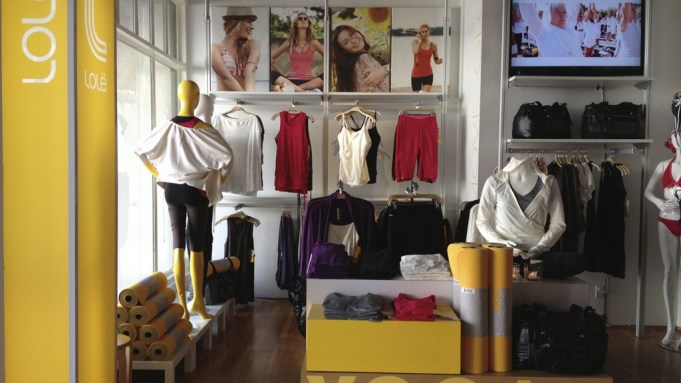 Lolë has brought its unique take on retail to Santa Barbara, Calif.

After opening its first U.S. store in New York’s TriBeCa neighborhood last year, the Montreal-based women’s activewear brand is dipping its toe into retail on the opposite coast with a six-week pop-up on State Street, Santa Barbara’s main retail thoroughfare. Bernard Mariette, president and chief executive officer of Lolë’s parent company Coalision, explained he planted the pop-up in the coastal city to introduce Lolë, which is carried by REI, Dick’s Sporting Goods and Eastern Mountain Sports, to multibrand retailers in the area that might consider carrying it or to possibly attract the interest of a retail partner for a future, permanent store.

“Santa Barbara is a typical example of where we don’t have a strong wholesale base, but we have a community which is passionate about Lolë,” said Mariette. “We have friends that are complaining that they don’t have an alternative to our competition. We decided to do a pop-up store to support the community to give them an alternative to the Lululemons and North Faces of this world.”

Mariette also considers Lolë’s stores alternatives to the traditional retail stock. He doesn’t actually call them stores, but rather ateliers or showtiques. Developed with branding firm Identica and architectural firm Aedifica, they use iPads instead of cash registers, have green walls instead of windows, center around big wooden tables that Mariette describes as kitchen tables to foster interaction and serve as venues for exercise classes, social gatherings and charity functions. Mariette estimated there are at least four activities in an atelier per week.

“The retail world is going to change rapidly and brick-and-mortar has to do something else other than just sell product. If you just sell product, it is going to be more convenient to go online, and the store becomes where you try a piece of clothing and then you go to the Internet and buy it at the best price,” said Mariette. “It is a great experience to go to a place where people have the same values as you, you learn something and, on top of that, you can buy some clothes. You can’t have a pure commercial space. It has to be more comfortable, where you don’t feel that you have to buy. That’s why we closed the window. I really believe that the real window for the brand is online.”

It’s not only Lolë’s stores that serve a higher purpose than solely commerce. Mariette insists the brand stand for conscious consumption. “I’m not into fast fashion. I really believe that we should slow down. Fast fashion is very expensive for the consumer and the planet. When you buy a product, it should be an investment,” he said. Turning argument into action, Lolë’s Yellow Label program, which runs until Dec. 24, rewards customers with $50 gift cards if they give up old Lolë coats. Lolë reworks the old coats, and the reworked garments are sold online for $20 each with proceeds being donated to a food bank.

Coalision, which is owned by private equity firm Kilmer Capital Partners, has generated $85 million in annual sales in Canadian currency, and Lolë is its biggest brand. Retail accounts for 12 percent of Lolë’s total revenues, and Mariette doesn’t want retail to overtake the brand’s wholesale sales. Lolë is available at more than 1,000 doors. To help build the wholesale business, he said Lolë is going to launch a White Collection of items 20 to 30 percent above its current retail pricing to target prestige department stores.

Lolë’s merchandise is divided into four categories: pulse for yoga and similar pursuits priced from $45 to $100, outerwear from $180 to $400, lifestyle sportswear from $30 to $100 and swim from $40 to $75. Taken together, pulse and swim are the largest merchandise grouping in terms of dollars, although outerwear is a close second. Head designer Andy Thê-Anh infuses Lolë’s pieces with femininity, according to Mariette, who also asserted Lolë’s mission is for the merchandise to be versatile and well made. “There is a fusion between fashion and sport more and more. That is what differentiates us,” he said.