The activewear retailer has unveiled a new prototype that will serve as the model for stores as expansion kicks into gear next year. 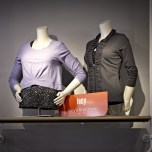 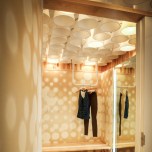 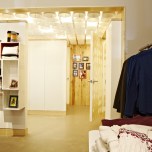 Lucy’s past, present and future have come together in Burlingame, Calif., where the VF Corp.-owned activewear retailer opened its first store in 2001 and has unveiled a new prototype that will serve as the model for stores as expansion kicks into gear next year.

After a tumultuous period for Lucy that saw executive shifts and a scaling back of ambitious store rollout plans VF had when it acquired the company, president Mark Bryden views the prototype as an important step toward reigniting the brand. “Through the years of ownership, it may have drifted off of the original intent. Our vision is really to bring Lucy back as a premium, women’s activewear brand in the marketplace and recenter ourselves back to where it was always envisioned by the founders,” said Bryden, who joined Lucy after former president Shaz Kahng departed last December.

Working with the New York-based Rockwell Group, Lucy honed in on key qualities of the brand — it’s classic, open, lively, warm and emphasizes thoughtful design — which it wanted to reflect in the stores. In order to do that, the updated store design ripped away layers (gone are canopies over the fixtures, an awning on the facade, and heavy, dark wood) that distracted from the merchandise. In its place are fixtures of light maple wood and powder-coated steel, and display tables in picnic and honeycomb varieties that reinforce the store as a gathering place.

“What we wanted to do was lighten the fixtures up so that the clothes themselves are what bring the color and vivaciousness,” said Dawn Dzedzy, director of brand marketing at Lucy. “We achieved that with the fixture package, and then we also really wanted to reiterate that sense of welcoming and social community that we’re known for at Lucy.”

In Lucy stores, customers tend to congregate at the dressing rooms, and Lucy paid close attention to getting them right. Dzedzy explained Lucy created a communal dressing room area with flattering lighting and adjustable mirrors where customers can hang out and enjoy trying on activewear, which can sometimes be an intimidating experience. “We wanted to make sure the lighting was good because how many times have you gone into a fitting room, and you just want to jump out the window because the lighting is horrible?” she asked.

Although the store’s assortment is divided by Lucy’s activewear apparel categories of yoga, run, train and explore, a catch-all outdoor lifestyle category, the brand has focused on merchandising outfits together because it has found customers, who regularly spend at least 30 minutes shopping at a Lucy store, like to wear ensembles of matching tops, bottoms and jackets. Dzedzy said, “She’ll have an easier time seeing the product and understanding how it goes together.”

If any specific merchandise piece is spotlighted in the prototype, it is pants. Already the strongest item in Lucy’s merchandise arsenal accounting for 40 to 45 percent of sales, pants have moved from the wall to the center of the store to further solidify their position at the heart of Lucy’s merchandise universe. “It really underscores how much we believe in our pants,” said Dzedzy.

Pants are priced mostly from $89 to $108, with the exception of capri styles that are $69. Tops are priced predominantly from $59 to $89, and outerwear from $128 to $198. Across Lucy’s merchandise, yoga is the number-one category, followed by explore. Run and train, at roughly the same size in sales, round out Lucy’s merchandise assortment. There are nearly 350 stockkeeping units at a Lucy store.

“The person who knows us for yoga, we’d like to introduce her to other categories as well,” said Dzedzy. Added Bryden, “If we’re successful in really bringing Lucy back to the market the way it was always intended and performance is the key active message around that, the other category products will grow. That would be train, run. I would say that the explore side by default would be smaller as a percentage.”

Outside of its own stores, Bryden is a vocal proponent of Lucy as a wholesale activewear brand. Today, wholesale is less than 10 percent of the business, with the brand sold at around 400 gyms and fitness studios. Lucy has begun to pick up bigger wholesale accounts such as REI, where it launched in the spring. “We’re not envisioning that Athleta and Lululemon will have that as part of their strategy, so that gives us an opportunity to fill in some of that white space more quickly,” said Bryden.

VF purchased Lucy in 2007 with the aim, expressed in WWD in August of that year, of taking it from a 50-unit chain generating $57 million in revenues to a 250-unit chain generating $350 million in 10 years. While the women’s activewear segment has ballooned since then as evidenced by the stratospheric growth of Lululemon, Lucy has largely remained stagnant. Bryden wouldn’t discuss Lucy’s current revenues, but, judging by its store base of 57 units, only seven more than it had five years ago, the retailer so far appears to not have lived up to VF’s early expectations.

Bryden’s task is to get Lucy, which was started by Nike alum Sue Levin in 1999, on the move again. Signs are emerging that that’s starting to happen. “If you look at average dollar sales, our conversion, our units per transaction, we would say we are satisfied with all those,” said Bryden. “What we need to do is bring more people through the doors.”

To help boost traffic, Bryden has set out to remodel 70 percent of its stores during the next two years. On top of the remodeling, Lucy anticipates adding 10 stores next year. The new stores will open in markets without Lucy units in the Midwest, where the company has a small presence compared to the coasts, as well as existing markets in the Midwest, Northern California and the Northeast.

“We’re going to open new doors next year, bring them to life, remodel, expand into wholesale and relaunch our Web site. So, next year will have growth, but it is really about proving the concept,” said Bryden, adding that “2014 and beyond should be a significant acceleration of the plan.”