UBM Advanstar, producer of MAGIC Marketplace, entered into an alliance with Eurovet-Curvexpo that will bring the lingerie and swimwear show into the MAGIC fold. 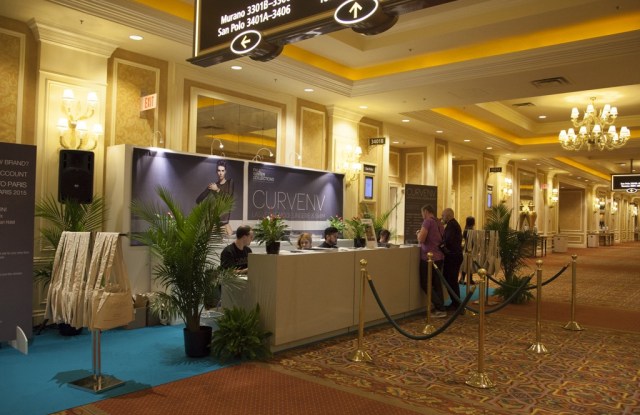 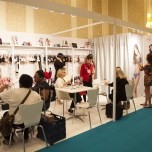 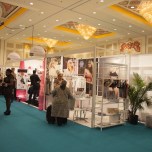 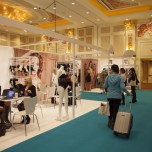 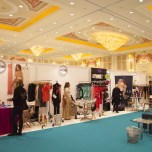 UBM Advanstar, producer of MAGIC Marketplace, has entered into a strategic alliance with Eurovet-Curvexpo that will bring the women’s lingerie and swimwear show into the MAGIC fold beginning in August.

Under the terms of the deal, CurveNV@MAGIC will relocate its show from the Venetian’s Convention Center space to the central hall at the Las Vegas Convention Center, adjacent to the WWDMAGIC show. CurveNV@MAGIC will be held twice a year, in August and February, and will significantly increase the amount of lingerie and swimwear available to retailers shopping the Las Vegas market.

The deal was revealed on the opening day of the MAGIC Marketplace shows here Tuesday, where the mood was upbeat amid the busy exhibition halls. As for early trends, activewear and loungewear continue to dominate the market. Key items included bodysuits, skirts, fleece, French terry knit joggers, lounge pants, cocoon and pullover sweaters, and cardigans, while at the existing Curve show, several brands introduced expanded loungewear and sleepwear groups.

Although some East Coast buyers struggled to get to Vegas because of winter storms, the retailers who were in attendance were optimistic, given a strong holiday season, good early spring receipts and the improving U.S. economy.

Discussing the new deal, Joe Loggia, UBM Advanstar’s chief executive officer, said, “We are extremely pleased to partner with Eurovet/Curvexpo. CurveNV@MAGIC allows us to be more responsive to buyers’ needs by further expanding the already dynamic product offerings found at MAGIC for retailers large or small.”

Christopher Griffin, president of WWDMAGIC, added: “Our goal is to make it as easy as possible for the buyers to dress their customers from top to bottom.”

Griffin admitted that while WWDMAGIC had dabbled in these categories, its selection was not as “meaningful” as that at Curvexpo. “So it made sense to partner with someone already doing a good job,” he said.

Griffin said the Curvexpo New York show is held at the same time in the same place as Advanstar’s Coterie, so “we were neighbors.”

Pierre-Nicolas Hurstel, Curvexpo USA’s ceo, said the partnership “will allow us to better serve the West Coast and international buyers by offering them a comprehensive selection of swimwear and lingerie brands. By developing a deeper, more concentrated pool of buyers, we will increase brand revenues.”

He stressed that the partnership was only for Curvexpo’s Las Vegas edition and will not impact its events in New York, Paris, Hong Kong, Moscow, Cannes and Shanghai.

He said having Curvexpo in a different location made it “very complicated for brands and buyers. They wanted everything under one roof. That’s why we started to discuss a partnership.”

The relocation of the show from the Venetian complex to the Las Vegas Convention Center will be more convenient for women’s buyers. Most of the shows at the Venetian, which include Liberty Fairs, MRket, Capsule and Agenda focus primarily on men’s wear.

Hurstel said in its new home, Curvexpo will have its own entrance and distinct look and feel. “We will re-create what we have now at the Las Vegas Convention Center,” he said. “It’s not just going to be a section of the MAGIC Marketplace.”

He said the August edition will offer 250 exhibitors in around 20,000 square feet of space. It will also offer activewear and resortwear, two important and complementary categories to its core swim and lingerie offerings.

Outside of the physical shows, buyers will have access to a newly launched Web site for Curvexpo and will also be able to access MAGIC’s retail buyer technology platform, Shopthefloor.com.

At the show on Tuesday, exhibitors were generally upbeat in their response to news of the newly formed collaboration.

Joseph Smith, director of sales specialty accounts for Wacoal America, said he is looking forward to attracting buyers when the show relocates. “We are all definitely excited about that overflow of boutiques — all of the boutiques that are not intimate boutiques, but have an intimate section. We think it will energize Curve Vegas. CurveNY is phenomenal. It’s four to five times the amount of vendors than the Curve Vegas show. I think this will breathe life into Curve Vegas. We think it’s important to have an East and West Coast show.”

Patty Leto, senior vice president of merchandising for the Doneger Group, also said it’s logical for Curvexpo to leave the Venetian and join WWDMAGIC with its massive number of retail buyers. “The buyers are already there, so they can piggyback off the traffic,” she said. “It makes perfect sense.”

Willy Mrasek, creative director for Jezebel, Felina and Black Bow lingerie, said he’s taking a wait-and-see approach “until I see the logistics of how buyers will walk into the venue. The minute it becomes inconvenient, buyers will stop coming in.”

WWDMAGIC’s Griffin said his show attracts more than 30,000 buyers to Las Vegas twice a year and “we’re the number-one reason they’re here. We have a lot of gravitational pull when it comes to the women’s business, so it makes sense to be with us.”

Marie-Laure Bellon-Homps, Eurovet’s ceo, said, “This strategic partnership is a great step forward; it further supports Eurovet’s mission of serving and uniting the swimwear and lingerie industry in all the strategic markets worldwide.”

Barbara Brady, director of ISAM, the International Swimwear/Activewear Market, added, “ISAM is excited about having swim and lingerie together under one roof — it’s exactly what the industry has been asking for.”