The capsule collection of Hollywood-inspired looks will be shown to celebrities and their stylists Feb. 23 to 25 at The Four Seasons Beverly Hills. 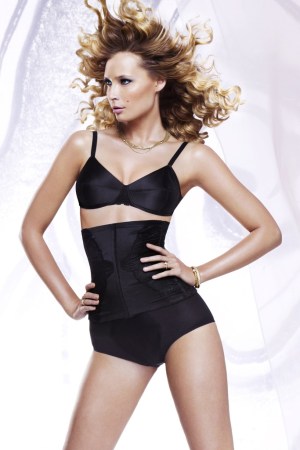 Maidenform will be doing a dress rehearsal at the Oscars.

The all-American bra and shapewear brand will unveil a limited edition collection of Hollywood-inspired retro looks to celebrate its 90th anniversary. The capsule collection will be shown exclusively to celebrities and their stylists Feb. 23 to 25 in the Maidenform Suite at The Four Seasons Beverly Hills.

“We identified this special milestone as an opportunity to salute our history and to show how far we’ve come. It exudes the sensuality of old Hollywood glamour, infused with today’s best intimates technology,” said Reznik, who oversees the $600 million company.

The vintage-inspired designs incorporate luxurious fabrics including a stretch, woven satin from Boselli, an upscale Italian silk mill, and stretch lace by Luna, a leader in high-end specialty laces.

Norah Alberto, global director of publicity for Maidenform, said the Hollywood connection is a “great way to let everyone know we are a top resource for intimate apparel.”

“We had a Maidenform suite at the Four Seasons for the first time last year and it was a success.…Just getting Maidenform in touch with these influencers is one of our goals, and the connection of celebrities with Maidenform’s 90th anniversary makes it even more exciting,” said Alberto.

Among the notable stylists who have booked appointments are Lawren Sample, whose clients include Cameron Diaz and Drew Barrymore, and Cristina Ehrlich, who costumed Tyra Banks in “America’s Next Top Model,” as well as Linda Medvene who has dressed Angelina Jolie, Marisa Miller and Hillary Duff.

Reznik will host a media breakfast at the Soho House on Feb. 23 with Janie Bryant, the costume designer for “Mad Men” who also is a Maidenform spokeswoman.

The 90th anniversary collection will be available at select retailers in April. There will be five silhouettes: a waist nipper, which will retail for $80; a control half-slip priced at $75; a control full-slip for $130, and two bras — an abbreviated longline style for $75 and a wire-free one for $50. Colors include black and gunmetal gray. Cup sizes will be 32 to 36 B and C, while the slips and waist nipper will be sized S, M and L.