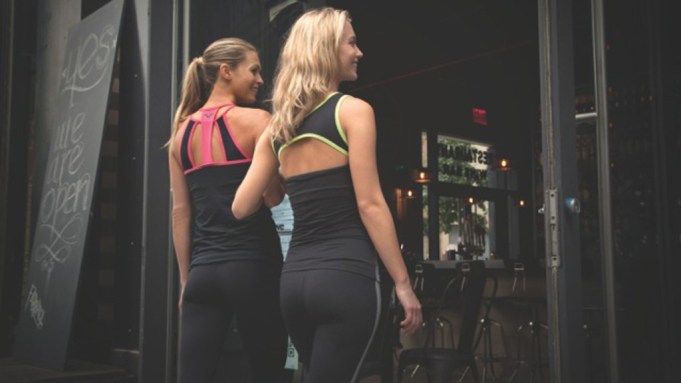 Getting your VIPE’S on is a priority for Marlies Korijn, designer and chief executive officer of the newly launched VIPE activewear brand.

VIPE — an acronym for VIP Exercise — is a brand created in the Netherlands that will be sold exclusively in the U.S. by sales representatives nationwide. It is projected to generate first-year wholesale sales of $1 million, according to Korijn.

She is no stranger to the fashion business. A former field hockey star in her native Netherlands, Korijn grew up learning the fashion trade at Etam, a specialty retail chain owned by her family.

Early on, she had a dream of designing a line of activewear that fulfilled her personal demands for function and comfort, and founded VIPE with a line of sportswear in The Netherlands in 2011. Having earned a B.A. in marketing and communications, she studied exercise science to fully understand the core issues of comfort and mobility while working out in active apparel.

“There are brands like Nike and Reebok that represent pure performance for real athletes, and other brands like Lululemon for sweet housewives who exercise….VIPE is in-between with fewer cuts and styles, and it has a look of fashion in colors you don’t typically see in activewear,” said Korijn. The colors include a deep hue of teal she calls Green Waterfall; a warm, earthy red called Sunset Red, and a soft, mid-tone pink called Morning Pink.

The collection has strategically-cut silhouettes that move and stretch with the body in a proprietary “VIPE-vibrant” fabric that wicks away moisture, and treatments such as a reflective silver logo print. A pocket at the middle of the back of tops was designed to safe-keep cards and cash.

“I wanted to make sure that for each sport, VIPE is about comfort…that it stretches all the way and you can move your back freely. You see a lot of women go to Starbucks after a run. They want to keep a $10 bill or a credit card, and the pocket at the back is in an area that doesn’t move around. It stays put,” she said.

Styles include tanks, jackets, T-shirts, and capris and shorts. Suggested retail is $48 to $122.

Distribution is aimed at sports retailers, specialty boutiques, high-end spas and resorts and yoga studios. The line is also available at Thevipe.com.

So far, the line is sold at 50 specialty stores in the U.S., and Korijn said she anticipates doubling the number of doors to 100 this year.