The forecast for Miami Swim Week is promising, with trade shows growing, moody trends, retro references and a slew of new brands entering the market. 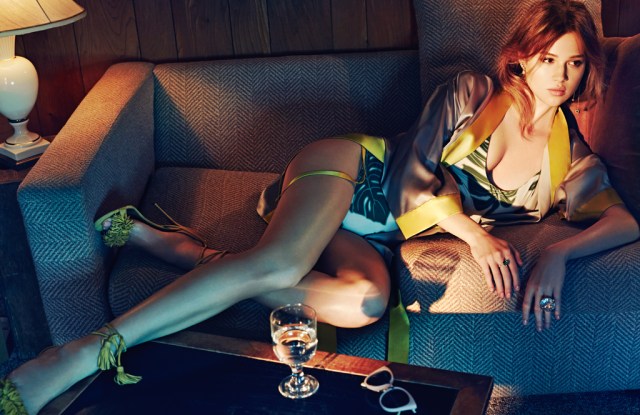 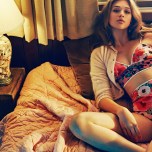 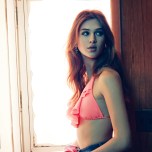 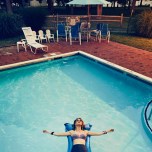 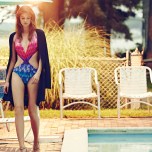 Vendors heading into Miami swim week, a round of runway presentations, trade shows and related events concentrated from July 18 to 21, are buoyant about business, adding categories and expanding product offerings. Tommy Bahama and Shoshanna, for example, are broadening their prints and cover- ups, while the Amerex family of brands will add categories and more size options and introduce Ellen Tracy swimwear.

Meanwhile, show organizers are reporting increased numbers of brands — and lots of new ones — filling their aisles.

“Swimwear has done a great job of keeping the consumer in mind,” said Marshal Cohen, chief industry analyst of the NPD Group, which reports total sales of women’s swimwear in the U.S. was $3.3 billion, up 10 percent from the previous year. Globally, the category generates more than $13 billion for women, men and kids.

Cohen said consumers are wearing swimwear as ready-to-wear more than ever, and brands are adapting by providing expanded assortments and new styles that can be worn in multiple ways. These styles include reversible swimsuits, mix-and-match separates and cover-ups, a category that’s driving the industry’s growth. NPD reports U.S. sales of women’s cover-ups were $369.5 million, which is a 16 percent jump from the previous year.

This growth will be evident at swim market week in Miami. Established brands are moving into different categories and a swath of new swim brands is also emerging, according to SwimShow organizer Judy Stein, who noted that her trade show will feature about 100 lines that are new to SwimShow.

“People are very positive because women’s swimwear is one of these industries that continues to grow,” Stein said.

One change this year is that IMG will not host fashion shows at The Raleigh hotel, as reported. But it hasn’t dampened spirits.

“I think there was a temporary impact on the press side, but not on the buyer side,” said Rick Fatzinger, cofounder of the rebranded Hammock swim trade show, which was the former Salon Allure exhibition. “The buyers are coming either way and we’ve been contacted by more brands than we have ever been.”

In IMG’s absence, production companies LDJ Productions and Funkshion Fashion Week, which have both been involved previously with Miami swim week, are picking up hosting duties and organizing fashion shows to take place across multiple venues, including the W South Beach hotel, which will host shows from designers including Mara Hoffman, Indah and Caffe Swimwear.

Linda Sassoon, president of Gottex Swimwear, said her brand, which has shown with IMG in past years, will now work with LDJ Productions to produce its fashion show on July 18 at the 1 Hotel. “It’s very important for us to showcase our collections for both press and buyers,” said Sassoon.

Gottex is also exhibiting at SwimShow, which is in its 33rd year and will run from July 18 to 21.

Stein said because of construction at the Miami Convention Center, the show will cover two halls after being spread across four halls the past two years. However, Stein is still expanding exhibitors to include more men’s and children’s swimwear.

“We’ve always had men’s and children’s as part of the show, but they have never been to the capacity that they are now,” Stein said. New men’s lines that are showing include Tom & Teddy, Strong Boalt, Onia and 98 Coast Av.

Instead of its usual trend seminar, SwimShow will host a business workshop covering how brands can generate business through social media and e-commerce on July 18 at 12:30 p.m. To offer showgoers a break, Stein has organized a Zen area that will offer massages, henna tattoos, makeup sessions and quick nail polish change services.

Tommy Bahama is participating in SwimShow and Suzanne Bryant, senior vice president of women’s design, said it will be showcasing a broadened print selection and a larger variety of cover-ups.

“Retailers come to us for cover-ups and we’ve really been able to build that story,” Bryant said. “We’ve also been able to go beyond this tropical identity and embrace some sophisticated and sporty patterns.”

Shoshanna Lonstein Gruss, founder and creative director of Shoshanna, has noticed a greater interest in cover-ups and will show more at SwimShow, with modern high-neck styles, ocean-inspired prints and swimwear with cutouts.

According to Ira Ganger, president and chief executive officer of Amerex Group, a multibrand manufacturer that holds the swimwear licenses for Red Carter, Jones New York, Jessica Simpson and Bleu by Rod Beattie, its brands, exhibiting at Swim- Show, will introduce more D-cup swimwear along with high-neck styles, crop tops and rash guards. Amerex is also launching Ellen Tracy swimwear at the show.

“We see the movement toward more contemporary styling in the modern misses’ area and we plan to lead the way with Ellen Tracy,” Ganger said. “Sexy swim is crossing over into all departments, from misses’ to plus sizes.”

Hammock, formerly Salon Allure, is in its sixth year and has teamed with Miami chain Babalu. “We never want to do the same thing every year,” Fatzinger said. “We wanted a brand refresh and thought the show concept could survive the name change.”

Fatzinger said Hammock, which will take place at the W Hotel from July 18 to 20, has doubled in size — its exhibitor list spurt from 40 to 90 since the last show. Established brands will continue to show in private suites, but for the first time, Fatzinger will use W’s 4,400-square-foot open ballroom to give newer brands more exposure. The larger space, which Babalu is merchandising, will accommodate more accessories, resort beauty brands and men’s.

Hammock will host an opening party and runway show, which is sponsored by Lycra, at W Hotel’s Wet pool on July 17. The show will feature work from luxury swim brands including Shore and Issa de Mar that were tasked with creating pieces made from fabric containing Lycra. Additionally, Fatzinger has collaborated with the European Fabrics Manufacturers to showcase 15 European swimwear brands including Citip and Taiana that will introduce their spring 2017 fabric collections to the U.S. market.

Raj Manufacturing, licensee for Ella Moss and Splendid swimwear, will show at Hammock. Splendid, which is known for its solid and striped swimwear, is introducing bright colors, bold prints and more reversible, mix-and-match options, while Ella Moss will showcase more cover-ups in addition to water-washed boho prints and swimwear with macramé details, embroidery and lace.

Cabana, which is held under two tents across from Hammock and runs from July 18 to 20, has grown by 40 percent, according to cofounder Janet Wong. The show will feature 60 new brands including exhibitors such as Fella, Dodo Bar Or, Poupette St Barth and Cali Dreaming, which will preview more prints and increase its Covered line of cover-ups and introduce a reversible program. Wong said Cabana is also increasing its men’s and activewear business. Men’s swim brands exhibiting include Vilebrequin, Rivieras, Robinson les Bains and Solid & Striped. Activewear labels include Splits59, Ultracor and Koral Activewear.

On the show experience side, Cabana has partnered with GlamSquad, a beauty services provider app, which will run a free braid bar on-site.

Also taking part in swim week activities, The Standard Spa in Miami Beach will host a pop-up shop for luxury lingerie and swim brand Eres, open to the public on July 18 and 19. Also, Pret-á-Surf will launch its spring swim and surf collection with a presentation on July 18, hosted by 2015 Sports Illustrated swimsuit issue cover model Hannah Davis.