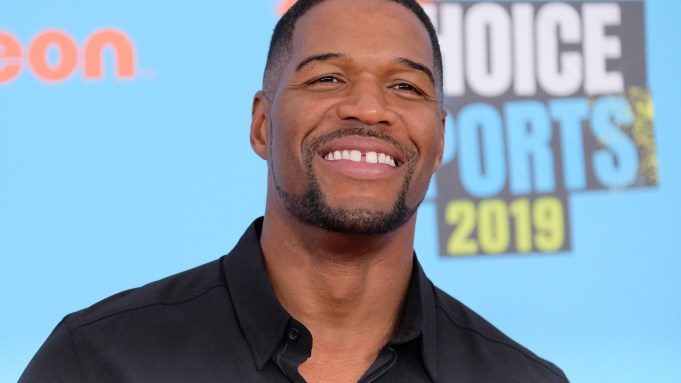 Michael Strahan, who transformed himself from an NFL football player into a household name, with roles as host of “Good Morning America,” the “$100,000 Pyramid” game show, “GMA3: Strahan, Sara & Keke,” an analyst on “Fox NFL Sunday,” and Fox’s “Thursday Night Football” pregame show, has another project in the works.

“It’s very exciting. I got my start at the NFL, and I’ll never forget that. It’s almost a full-circle moment to bring something back to the place that you started,” said the 48-year-old Strahan.

In collaboration with his business partner, Constance Schwartz-Morini, the MSX by Michael Strahan for NFL collection, manufactured by G-III Apparel Group, is geared to both women and men. The capsule collection includes tank tops, T-shirts, side knot Ts, polos, sweatshirts and zip-up jackets in turquoise and gray, the official Super Bowl LIV colors. The Super Bowl LIV logo will appear on each piece.

Retail price points range from $34.99 to $69.99, and the line will be offered at Shop.michaelstrahan.com, and will be sold at the Super Bowl Experience in Miami, pop-ups, hotels and select official retailers in Miami, where the Super Bowl takes place on Feb. 2 between the Kansas City Chiefs and the San Francisco 49ers. The capsule will be housed on the web site until it sells out.

According to Schwartz-Morini, the capsule features “very simple, stylish looks that will appeal to everybody for the Super Bowl.” Sizes range from small to XL for women, and medium to XXL for men.

Strahan partnered with Schwartz-Morini, whom he met 25 years ago when they were both at the NFL, to form SMAC Entertainment nine years ago, a multidimensional talent management, music, branding and production company in New York and Los Angeles. Schwartz-Morini is chief executive officer and cofounder of SMAC Entertainment, and Strahan is partner and cofounder. They are involved with a multitude of scripted and non-scripted TV projects with prime-time cable and broadcast networks, as well as producing two feature films.

Both Schwartz-Morini and Strahan, along with their team, were involved in the capsule’s design. SMAC also helped architect TV personality and sportscaster Erin Andrew’s line for the NFL called Wear by Erin Andrews. “It was phenomenal. It was the NFL’s number-one women’s brand this year,” she said.

Strahan said he enjoyed the experience of developing the capsule collection for the NFL. “To do a capsule collection is fun, it’s cool, it’s exciting and it’s an extension of a brand that we’ve already built. Fox is hosting the Super Bowl and to be able to have this collection at a Super Bowl that we’re hosting, and to kick it off there is really special,” said Strahan, who added that he’s looking forward to wearing the capsule at the Super Bowl and will make sure all the “other Fox guys are outfitted in it.”

“I’ll give it to them, and knowing them, it’ll save them from having to bring extra clothes and washing something, and I’m sure they’ll wear it, too,” he said.

Discussing future opportunities, Strahan said he’s been exploring the home category and looks to expand his collection with the NFL.

During his football playing days, Strahan acquired an avid interest of fashion. “I’m a purveyor of fashion and watches. I like the ensemble and the whole look. When I got out of college, came to the pros, and the first time I was financially able, I started to enjoy it,” said Strahan, who retired from playing football for the New York Giants at the age of 36 and was one of the league’s all-time sack leaders.

“What we’ve done with our tailored brand and our ath-leisure brand [for J.C. Penney] have really done well the last few years,” he said. Strahan believes he can do a line for J.C. Penney and have products for other distribution.  “I think there’s room. I’m not going to compete with Tom Ford. I think there’s a lane where we can be intermediate,” he said.

Strahan enjoys wearing his own clothing line and is very happy with the style and the quality. “I wear the stuff 24/7. To be honest, every time I go out, my friends say, ‘You’re wearing that again?'” He’ll wear it on Fox on Sunday and Thursday, he wears it every day on “Good Morning America” and on “GMA3: Strahan, Sara and Keke.”

“It’s my preference to wear it, it’s mine and it’s great. I prefer to wear my own product that I know and I trust instead of something else,” he said.

During football season, Strahan spends every weekend in Los Angeles and flies back to New York every Sunday night for “Good Morning America,” on Monday and will spend the week hosting his various TV shows. He has a hard time choosing his favorite gig.

“I don’t know if it’s amazing or it’s insane….Football is always near and dear to my heart, and the camaraderie keeps me close to the game. I don’t have a bad job. That’s why I do so many of them. I love the news because it’s interesting and a great team. I’m more informed about the world, and what’s going on,  and how things work than I’ve ever been in my life,” he said. “Daytime with Keke and Sara is fun. We laugh, it’s crazy fun over there. I love doing the game show [“$100,000 Pyramid”]. You’re in control of running the show and have to be mentally tuned in and involved, and people are winning real money and it’s life-changing and awesome,” Strahan said.

As for what pushes him to do so much, he said, “I love it. I just think it’s just a desire to try some things I’m interested in and never tried before. It’s also to try and be more than just an athlete. You get lumped into one career and one field, and if you’re not careful, you get stuck there. For me, I see myself in a multi-faceted way. I grew up in Germany and I never thought I’d be a football player. I started playing my senior year. Life is just bigger than sports, and I’ve always had that in mind and pushed myself to do more things now that my football career is over.”

Asked which team he’ll be rooting for in the Super Bowl, Strahan said he doesn’t have a clear favorite.

“Not really. Being that I’ve been there before, it’s amazing to get to this point. It’s almost sad that someone has to lose. In other sports, it’s  best of seven or best of five. Here, you’ve got one shot to get it right. there. Your best guy might have his worst day. I just hope the best team wins,” he said.

Michael Strahan Opens Up on Penney’s, the Oscars and Being Shy