At Mode City, retailers sought intimates and beachwear that had a “wow” factor or brought a fashion-edge. 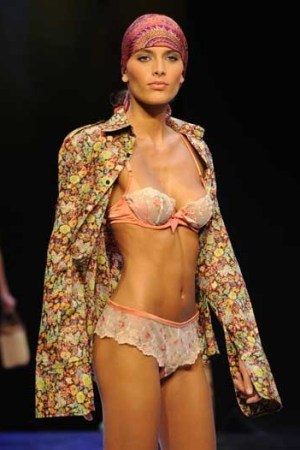 PARIS — Innovation was the driving force for retailers and vendors at the three-day Mode City trade fair here.

As the industry tried to blunt the impact of the recession, intimates and beachwear that had a “wow” factor were sought after, along with collections that had a fashion edge. Key focuses included the loungewear category in ultralight, second-skin garments and the emergence of fashion shapewear that had a clean, contemporary look.

Gottex will present its collection under its new head of design, Molly Grad, today at Bryant Park in New York, she noted.

Several stands, such as Jonquil, were consistently busy at the fair, which ended Sept. 7. Diane Samandi, designer of the Jonquil and In Bloom by Jonquil lines of sleepwear, daywear and robes, said business had been good.

“It’s a smaller show, with fewer lingerie exhibitors, and I was concerned about whether our customers would come, but they’re all here,” Samandi said.

However, she noted that few U.S. stores came to the fair. Attendance figures were not available.

Researching textiles for her spring 2011 lingerie line, Josie Natori, president and chief executive officer of Natori Co., said she was surprised by how “quiet” the lingerie segment of the salon was. But she expressed satisfaction in her fabric finds, notably some “wonderful textures, novel meshes and new laces.”

“We came away very pleased,” Natori said. “Everyone is very conscious of the challenging climate. People were a lot more accommodating and flexible.”

Former Myla creative director Franceska Luther King, who plans to launch a lingerie brand at the Salon International de la Lingerie in January, said the offerings at the Interfilière textile and lace segment were “excellent.”

“The highlight was finding producers of new trims,” King said. “For me, there was a lot more sparkle and second-skin finishes.”

The trend was underscored at the Interfilière’s Beach Innovation fashion show, which highlighted the growing importance of lingerie techniques on beachwear.

“Can you imagine going to the office wearing a bra that you can later swim in if you’ve forgotten your swimsuit because of its quick-drying properties? It’s about functional luxury,” said a spokesman for Junior SRL by Adele Zibetti, which specializes in laser-cut embroidery technology.

The company has invested in high-tech machines capable of embroidering directly on finished bra cups.

“You can wear it from the office to the gym to a club and the product remains fresh,” said Niki McMorrough, ceo and creative director of Made by Niki, which launched Slinkies, a line of body-conscious shapewear basics made of antibacterial, breathable fabrics. The designer also has rendered the range in white to target the bridal sector.

Regarding marketing concepts, several innerwear executives said they were substituting images of glamorous women with more natural-looking women for their marketing campaigns. The idea is to target the emotions of consumers who do not look like models.

“What the clients are saying is that many brands look the same,” said Inès de Montgon, director of image and communications at Simone Pérèle. “After 30, women tend to stick to three or four brands. But they are not only interested in the product and innovation. They want to buy a real story.”

The company is launching a print campaign this month based on a portrait of a “real woman,” using lifestyle images, she said. Making its debut in France and the U.K., as well as online, the campaign is likely to roll out to other countries next year.

“It’s not enough to simply show product — you have to convey emotion,” said Magali Lagathu, director of marketing and creation for Empreinte, a maker of full-figure and full-busted bras.

Empreinte released a new series of in-store visuals and visuals for the media in July. The photos are rendered in atmospheric shadowing showing a woman’s curves, the surface of the skin and cleavage.

Several new product launches were a highlight of the show. Among them was Huit, which launched a men’s swimwear line and a line of organic cotton lingerie, Huit Is Biotiful, a play on the French name for organic: bio. The brand recently opened its first store in June in Saint-Malo, France.

“Modal is superior to cotton as it doesn’t fray, lose its color or stretch,” said a Wacoal spokesman. “We believe it has a nice future in the lingerie sector.”

One of the buzz introductions at the show was a luxury lingerie and lingerie-inspired beachwear line by Anna Maria La Bianca, a former intimates designer for Victoria’s Secret and Calvin Klein. The signature collection uses innovative fabrics developed exclusively for La Bianca by Piave Maitex.

Among La Bianca’s highlights is a lingerie-inspired tan swimsuit with black flocking and a petal-theme corsetry-inspired nightdress featuring a fusion of allover fabric and lace bands. La Bianca’s Swim Clean line has graphic beachwear styles made from recycled plastic bottles.

Addressing the demand for special products, Seafolly, Andres Sarda and Chantelle were among the brands that offered limited edition collections.

“Price is more of a factor than it has ever been,” said David Finlayson, founder of British sales and marketing consulting firm Finlayson Associates.

Regarding trends, sculptural pieces in techno fabrics were a strong classification, particularly at Eres. Nicky Clayton, head of buying for Rigby & Peller in London, noted there was a prevalence of padded balconette and triangle bras teamed with deep, high-waisted panties. Key colors for intimates included plum, milky whites and chalky lilacs with highlights of aqua and coral.