Luxury legwear in metallics and back-seam sheers for fall made a big statement at last week’s trade show. 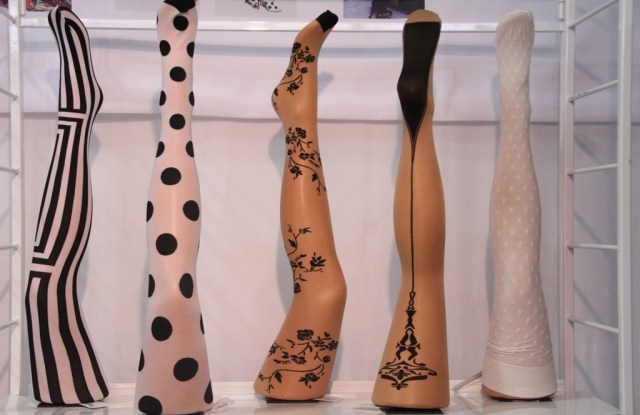 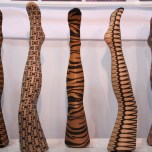 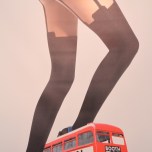 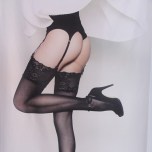 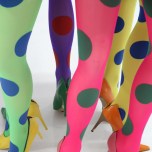 Exhibitors said the turnout of retailers from major stores, specialty boutiques and e-commerce sites was robust and order-taking was brisk for legwear items that have a look of luxury as well as fashion.

While anything rendered in black continues to be the number-one-booking trend, color played a prominent role in opaque and sheer styles, ranging from earth tones and pomegranate to paprika, cobalt blue and absinthe green. Metallics in red, blue, champagne and gold-tone textured tights — many of which are meant to be worn with evening fare or simply to punch up the look of a suit — were key items for holiday. Texture, especially in allover lace looks or sexy-looking lace trims on thigh-highs and stockings, also was a strong classification. Prints such as dots, bold graphics, floral tattoo motifs and trompe l’oeil treatments like faux garters were also among the top-booking ideas, said vendors.

“We’ve really enjoyed some great exposure over the past month with Paris Hilton and Rihanna wearing our Super Suspender legwear. It’s become our number-one item and all of our retail accounts are ordering it,” said Culhane.

He added that another group designed by Henry Holland for the Summer Olympics in London received strong reaction: tights bearing a red, white and blue Union Jack to represent Great Britain, stars and stripes for the U.S., and a Union Jack and stars for Australia.

“It’s part of Holland’s pre-fall collection with a flag theme.…The Union Jack is knitted so it’s not bright, just fashionable,” he said.

Regarding marketing, Culhane said the company will be launching an informational iPhone app that will advise women on how to properly put on tights and hosiery.

“We are doing this because we want to appeal to a whole new generation of women who don’t know how to put on legwear. This generation hasn’t worn legwear before and quite often their hands run through the tights and hosiery as they’re trying to put it on,” he explained.

Meanwhile, the stand at Emilio Cavallini was bustling.

Francesco Cavallini, vice president of the family-owned brand in Florence, singled out all-in-one bodysuits and tights in ornate lace patterns as the top-booking item.

“We also are doing very well with tops and matching tights embroidered with crystals and vintage looks inspired by the 1950s with back seams and floral tattoo motifs,” said Cavallini.

He added that the fall collection, which was unveiled at a presentation during New York Fashion Week, will be featured at a cocktail party and fashion show in London at the trendy club Sketch on March 21.

At the Gerbe stand, Alain Regad, president of the upscale French Gerbe legwear brand, gave his perspective on trends.

“What’s really interesting is the same trends did well at the Salon International de la Lingerie in Paris in January and at the Curve show in New York. The top colors have been ready-to-wear shades — paprika and absinthe. We have also done very well with metallic champagne and gold tights and lattice-pattern semisheer blue tights by Gaspard Yurkievich, with whom we are doing a collaboration,” said Regad.