When the British lingerie label wanted to revamp its swimwear, it turned to a region that’s an expert in the field — Brazil. 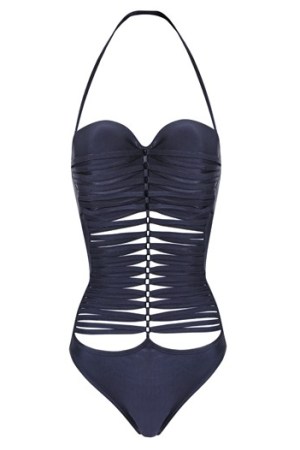 When British lingerie label Myla wanted to revamp its swimwear, it turned to a region that’s an expert in the field — Brazil.

Myla has tapped Brazilian designer Amir Slama, the founder of the swim label Rosa Cha, to collaborate with the label on a swim line launching for cruise 2012 in November. Slama, who left Rosa Cha in 2009 and has now set up a swim label under his own name, said the Myla collection is “defined by modern femininity with strong directional designs.”

The 60-piece collection includes styles that range from the sleek and simple, such as triangle bikinis with briefs, to more elaborate designs like a halter bikini with glamorous, hand-woven blue and gold rope ties. And true to Myla’s lingerie heritage, all the bikinis and one-piece styles are designed to be supportive. Cups are worked into all the tops, and the collection is designed to sculpt the body. Cynthia Gabay, creative director of Myla, said that the company, which had previously produced capsule swim collections, approached Slama to collaborate in order to “develop the line and take it to a higher level in terms of the design, quality and offering.” The range is manufactured in Brazil, where Slama oversees the process.

The collection was unveiled at Miami Swim Week, which closed Tuesday. Prices range from 150 pounds, or $242, for a triangle bikini set to 450 pounds, or $726, for a one-piece maillot with intricate strap details across the torso. Myla is also handling the wholesale sales for Slama’s own line, Amir Slama, which the designer said is inspired by “Renaissance architecture.” Comparing the new collections to his designs for Rosa Cha, Slama said the new pieces are “more minimalistic.”

“The styles are much more about femininity and making women feel confident and comfortable in their own bodies,” he said. The collaboration between Slama and Myla is ongoing and the next summer collection will be launched in February.