NAP: The Undoing of a Sleepwear Dream 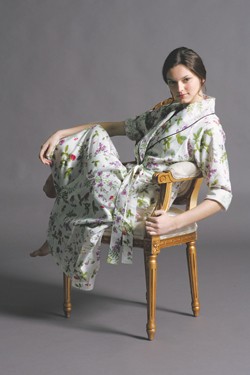 NAP Inc., a once-thriving $100 million lingerie company, has faded from the scene amid financial problems.

Today, NAP’s business, which once took up three floors of the 16-floor NAP Building at 171 Madison Avenue, has been downsized to selling candles, candleholders and related home accessories such as pottery by Bill Blass and Newport Blue. During the official market week in early February, a spokesman who was still with the company when asked why there were no innerwear collections to review, said, “We’re restructuring for this market only.”

Innerwear companies, like most apparel firms, are being hammered by the dismal retail climate and skyrocketing production and shipping costs. Some firms are cutting head count, as well as reducing employee wages by 10 percent.

But NAP stands out as an example of an entrepreneurial American dream that turned into a nightmare over the past several months due to mismanagement by parent company Nitches Inc., according to a number of former NAP employees, licensees and executives in joint ventures for distribution of European brands in the U.S.

Since NAP, whose name is an acronym for its three original partners — Adnan Kandiyoti, Pano Zomopoulos and the late Niko Oreopoulos — was formed in 1984, the company has been sold twice. The first time was in 2002, when it was acquired by Bill Blass Ltd. Three years later, Blass sold NAP to San Diego-based Nitches in an exchange of NAP shares for shares in Nitches.

Nitches, a publicly traded manufacturer and distributor of men’s and women’s apparel, did not file its annual report for the period ended Aug. 31 by its prescribed due date. The company voluntarily delisted itself from Nasdaq in December, allowing it to not file an annual report or quarterly earnings. The most recent stock price history of Nitches saw a 52-week change of minus 97.62 percent, and shares were trading at 0.03 cents on the pink sheets on Friday. The most recent quarterly data filed by Nitches was on May 31, which cited total revenues of $26.3 million.

Phone calls to Steven P. Wyandt, chairman and chief executive officer of Nitches, and his son, Paul M. Wyandt, president and chief financial officer, seeking comment about the company were not returned.

Victor Lee, former president of NAP, said he made repeated phone calls and e-mails to the Wyandts last year regarding the state of NAP’s business and its portfolio of brands, but never received a response. Lee, who said he did not serve as an officer or director of NAP after Nitches acquired the firm, is now president of a new company, Viceroy Collections, which sells and distributes the British lingerie brands Myla of London and Shock Absorber.

“I resigned from NAP in early October 2008 because I did not feel comfortable and did not agree with the manner in which the Nitches board and its officers were dealing with its ongoing financing and payment obligations,” said Lee. “It is a real shame what happened to Nitches and NAP. The board and officers of Nitches have disappointed a lot of vendors, former employees, landlords, customers and, of course, its shareholders. I am still a major shareholder of Nitches stock, which is worth almost nothing right now. I hope they can turn things around.”

“They laid off employees, without 24-hour notice and without severance, in two rounds — a week before Thanksgiving and a week before Christmas,” said Keyloun. “There are maybe two people left.”

Unresolved in the seeming unwinding of the company is the future of the NAP Building. Sources said Nitches has a 10 percent stake in the building, which has an estimated market value of between $50 million and $70 million.

The unraveling of the company began a year ago when disputes erupted between officials at NAP and French bra brand Princesse Tam Tam over late deliveries to Dillard’s Department Stores, Victoria’s Secret and Anthropologie.

“There were chargebacks that were passed on to Princesse Tam Tam, and they didn’t like it one bit,” Keyloun said. “Neither did the retailers.”

Brianna Scarborough, NAP’s former brand manager for Princesse Tam Tam and Shock Absorber, said, “They gave no reason for the layoffs, just that they were shutting down the brands. One season prior to shutting everything down with Princesse Tam Tam, we had problems with deliveries, and they said we owed them money. So we paid for spring and summer, but the same thing happened again for fall. But Princesse Tam Tam didn’t deliver and NAP didn’t want to ship until Princesse Tam Tam paid [past chargebacks]. Dillard’s, Victoria’s Secret and Anthropologie wouldn’t allow us to be late, and the shipment date passed, so they canceled orders. But we did very well with sleepwear business by Anne Lewin and Crabtree & Evelyn at Costco.”

Addressing the seven-year relationship between NAP and Princesse Tam Tam, Christophe Piras, export manager for the Paris-based bra brand, said, “There is nobody left at that company, but we are still on contract with both NAP and Nitches. Because of legalities, I cannot elaborate but eventually we will iron this out. From what I understand, Victor Lee’s position wasn’t easy, and they let everybody go. I have the impression that Steve Wyandt is not a very forthcoming man.”

There had been hopes for the newest license at NAP with O’Bryan Bros. Inc., a deal inked in December 2007 to produce, design and market a collection of sleepwear, robes and loungewear under the Cuddl Duds label. But the license was dropped this year by the licensee, said Mark Sandler, senior vice president of O’Bryan Bros.

“Some shipments were made in early fall ’08, but nothing substantial,” said Sandler. “The reason we withdrew our license with NAP was inactivity in February. We couldn’t contact anybody because there was nobody to talk to at NAP. We became concerned as milestone dates for fall 2009 product development were not met. As senior management and support staff began leaving the company, it became increasingly clear that NAP would be unable to fulfill the obligations of our license agreement with them. We contacted Nitches when we were ready to take the license back.”

Observers said an example of how Nitches failed to protect brand integrity can be seen in the case of the Anne Lewin label, once a resource for major department and specialty stores. The Anne Lewin label, known for the late designer’s flair for mixing textures and giving robes and sleepwear a sportswear flavor with a soft edge, was acquired by NAP in 1994. Two years later, Lewin left the company to work as a designer and merchandiser at the Limited Brands division of the Limited Brands Inc. After she departed, NAP de-emphasized the department and specialty store channel for the Lewin brand, and it eventually became a key label at Costco.

The Anne Lewin brand was acquired in January by Sally Satterberg, former senior vice president of the Body Drama unit of Nitches, and it’s expected to make a comeback at major department and specialty stores. A purchase price could not be learned, but a relaunch of the Anne Lewin brand could generate first-year wholesale sales of more than $5 million, according to industry estimates.

“I’m very thankful that Nitches allowed me to acquire the label,” said Satterberg, who now serves as vice president of the Anne Lewin division of Jaclyn Apparel, where the new collection was unveiled in February.

Officials at Crabtree & Evelyn could not be reached regarding the status of the company’s 15-year-old sleepwear collection. However, a former NAP executive said, “Crabtree & Evelyn Corp. decided to eliminate sleepwear because it wasn’t profitable for them. The last delivery was in July ’08, and there were no receipts for holiday. There’s still a lot of old inventory left over [at Nitches] from Crabtree & Evelyn, Anne Lewin, Princesse Tam Tam and other brands in San Diego and maybe the distribution facility in Reno, and they are trying to liquidate everything. Closeout retailers like Tuesday Morning are buying Crabtree & Evelyn robes and sleepwear for $5 per unit, and $3 per unit for Anne Lewin. Jobbers are also buying branded merchandise and private label robes for men for $10 that used to be sold at Saks for about $168.”

As for the 84-year-old Derek Rose sleepwear and robe label for men and women from London, Emily Hall, NAP’s former brand manager for Derek Rose, Crabtree & Evelyn, Eminence and Backwoods, said, “I’m a friend of the Rose family. When it became clear NAP wasn’t going forward with the Derek Rose brand, I became an agent for the brand, and I can now focus 100 percent on it.”

Regarding the Backwoods business, Nitches acquired Backwoods Equipment Co., a lifestyle retail chain and adventure business, in March 2008. But the deal went sour, and Backwoods, which operates nine retail units and the backwoods.com e-commerce site, bought back its $10 million business from Nitches in September.

Jennifer Mull, ceo of Backwoods, said, “I wasn’t happy with what happened at Nitches. There were some financial promises they weren’t able to fulfill. I’m now jointly developing a lifestyle [casual apparel] line for men and women for our Backwoods stores with Victor Lee and his new company, Viceroy Collections.”

Lending insight to the failure of the Backwoods deal, Lee said, “The straw that broke the camel’s back for me was Nitches’ inability to obtain the necessary financing that led to the unwinding of the Backwoods acquisition. Jennifer Mull and I had been instrumental in negotiating and arranging for Nitches’ acquisition of Backwoods in February 2008. Nitches completed the transaction with one seemingly simple post-closing obligation relating to a financial covenant. Nitches did not allow Jennifer or me to participate in fulfilling this post-closing obligation, and ultimately Nitches was unable to satisfy this covenant. Nitches had no real choice but to unwind the acquisition of Backwoods.

“Nitches’ management had attributed such failure to the seizing of the credit markets in September, but Nitches had more than seven months to resolve this issue. All of the efforts over the previous year by the Backwoods’ management team and me were frustrated, but the good news is, Jennifer and I are continuing to work together as partners on the Backwoods Collection.”