Ones to Watch at Miami Swim Week

A few fresh names to check out at the shows in Miami. 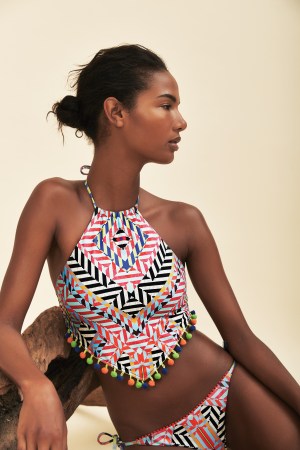 This story first appeared in the July 13, 2016 issue of WWD. Subscribe Today.

Multibrand manufacturer Lunada Bay Corp. has added Isabella Rose to its portfolio. Fresh from her leading role in the music video for Justin Bieber’s “What Do You Mean,” Xenia Deli is the face of the brand’s first photo shoot.

With an abundance of artisanal embellishment like neon tassels, hand-woven macramé and other trims inspired by friendship bracelets or a mermaid’s jewelry box, the music connection extends to festival fashion.

“We identified a desire from the consumer to infuse a luxe maker culture into each piece,” said Susan Crank, chief executive officer of Lunada Bay.

The daughter of a prominent female architect in D.C., Swanson studied interior design at James Madison University. Although she was one of the lucky graduates to land work in her field during the recession, the avid scuba diver switched to swimwear design.

“I’ve always sewn and wanted to put my art background to greater use,” said Swanson, who paints abstract and tribal prints and digitizes them for mix-and-match bikinis, one-piece suits and resortwear.

Titled “Funk n’ Sol” for its Seventies flair, the inaugural collection addresses basics and trends such as triangle tops with removable fringe and high-waisted bottoms with mesh inserts. Things get more interesting with novel one-pieces; a neck-to-navel halter features a mesh panel and ultrathin racerback, while an open-back style with cap sleeves also has a dramatic front mesh panel.

Long-running ready-to-wear house Nicole Miller is finally plunging into swimwear and related apparel with La Plage. The print-driven designer attributed the category to her active lifestyle, which she believes mirrors her clienteles’ needs. “I’m an avid water-skier and wakeboarder and saw a need for swimwear, rash guards and leggings that are fashionable and functional,” she said.

Miller’s signature tidal pleating — a selling point for her dresses for its slimming effect — crosses over to swimsuits. Prints are prominent, too: a rash guard mixes jungle and boho prints, and a caftan and wide-leg pants feature tropical floral.

Though the line officially launches in Miami, it’s already available at Nicole Miller’s stores and web site, a few resorts and at Life’style boutique in Sag Harbor, N.Y.

A fixture of New York society and the worlds of art and wellness, Hollie Watman collaborates with a London studio to create original artwork for her swim and ath-leisure collection. She led with vibrant octopus and striated floral prints in her line for spring 2016, and caught the attention of stores like Bandier and the Webster. For resort, themes are diamonds and pearls, and pink blossoms against a dark ground. Swimsuits and leggings sport some of her favorite phrases, like “Life is a gift, be present,” “Don’t be afraid to get your hair wet,” or “Life isn’t about finding yourself, it’s about creating yourself.”

Having designed children’s swimwear for Betsey Johnson, this marks Watman’s foray into women’s fits. One-piece suits with mesh inserts and modestly cut bottoms speak to her audience — who may have bid adieu to their twentysomething bodies but still have sex appeal and fashion sense — the kind of crowd that attended the line’s launch party at her Bridgehampton home in June.

Designer: Erin Deering and Craig Ellis
Based in: Monaco
Founded: 2012
Price points: $79 to $99
Showing at: Cabana

Taking a page from Warby Parker’s playbook, Triangl’s tale began when Erin Deering couldn’t find a cute bikini for less than $200 in Melbourne, Australia, for her second date with Craig Ellis. While most early dates resort to patter, theirs led to a game-changing business plan. In its nascent days, as with Warby Parker, Triangl sold exclusively on its own web site, and most of its promotion was via social media. The company blew up overnight through Instagram exposure by bikini bloggers and celebrities that hit its 15- to 35-year-old demographic like Kendall Jenner and Miley Cyrus.

Now, the couple will begin a foray into wholesaling at the Cabana show during Miami Swim Week.

“We never pay for promotions or collaborations, so girls who wear it genuinely love the brand,” said Deering, who came up through e-commerce (Ellis, a former professional Australian football player, dabbled in denim).

Sold as sets, Neoprene bikinis’ core tops are triangle, balconnet and bandeau. Stockkeeping units have ballooned to 2,100, with 50 styles added annually. Originally known for black binding and neon, looks have evolved with embroidery and floral and tie-dye prints.

Ruchika Chani discovered the age-old tradition of carpet weaving that became the impetus for her handbag and home collection, Chuchumai, while on an island-hopping holiday in Turkey. As she watched native women recycle carpet remnants, she recalled the complaints of resort boutique buyers during her stint in sales for bikini brand Zoe NYC.

“They were frustrated that all beach bags looked the same,” said Chani, whose bags are all individual designs ­— no two bags are alike. “Since they’re made from scraps, you never know what you’re going to get.”

Many styles among a dozen cosmetic cases, totes, beach bags and rucksacks are unisex. Chani continues to have the fabrics woven and assembled by the craftswomen in Turkey. Initially offering cotton, she plans to expand with touches of Lurex metallic and throw pillows.

“I like how it’s sustainable and sheds light not only on this endangered art form,” she said, “but also on the grim conditions of the weavers who will benefit.”