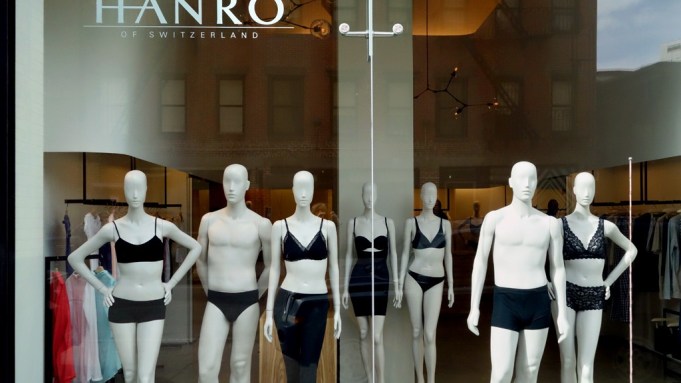 The newly opened Hanro of Switzerland flagship in the Meatpacking District of Manhattan is a precursor of additional Hanro boutiques to open in the U.S. in the next several years.

Nestled between high-end retail neighbors that include Christian Louboutin, Jay Godfrey and Intermix, the 875-square-foot Hanro shop opened in January and is proving to be a “laboratory” of merchandising and display concepts for the heritage brand, said Jan Snodgrass, president of Hanro USA.

“The neighborhood is taking to us very well, whether its local residents or visitors. Our emphasis has been to focus on fashion product and that’s become the overwhelming part of our business at the store,” said Snodgrass.

He pointed out that while the men’s luxury underwear market has limited distribution in the U.S., the brand has seen a doubling of men’s sales in the past four years, which currently comprise 17 percent of total U.S. sales. As a result, Hanro decided to dedicate more real estate to men’s underwear and loungewear in the New York flagship. Over the past month, the first retail unit in the U.S. has seen a 50-50 breakdown between men’s and women’s sales, said Snodgrass.

The boutique is also gaining exposure for the 129-year-old brand in the U.S. market, where it is sold at select department and specialty stores as well as at hanroUSA.com.

“We are getting a mix of people who have never heard of the Hanro name before, and we now have a lot of repeat customers,” said Jane Joyce, national retail services manager for Hanro. “A lot of customers are also saying, ‘I buy your underwear in Italy, France or Switzerland, but now I know you’re here.’”

Best-selling items for men include loungewear pieces of soft polyester and viscose that are brushed on the inside for added comfort, such as a robe which retails for $350, and an unconstructed shirt and pants for $145 and $155, respectively. The key color is solid gray.

Lounge separates are also top-selling items for women in solid gray and black in blends of silk and wool. Top styles are a jumpsuit priced at $375, an active-inspired top selling for $150, and coordinating pants for $225.

Meanwhile, business at the boutique is mainly conducted digitally with a sales associate scanning items as a customer selects merchandise. A counter at the back of the store is reserved for cash purchases. Joyce said customer service has become an essential commodity in conducting business and includes perks such as hand-delivering merchandise and keeping a stash of dog biscuits for neighborhood residents who often shop with their pooches.

The store, which is located in a landmark building from the Thirties with soaring 26-foot ceilings and exposed beams was designed by David Howell of DHD. Hand-blown chandeliers were created by Lindsey Adelman, and bronze display fixtures with a rich patina gloss were designed by DHD and produced by Face Design. Wood fixtures in warm hues of olive-ash by Bolger Woodworking add a clean, organic accent to the industrial setting for which Hanro invested $540,000.