Nike will open a sprawling new flagship in Harajuku, a district known for its cutting-edge street fashion and youthful clientele, this week. 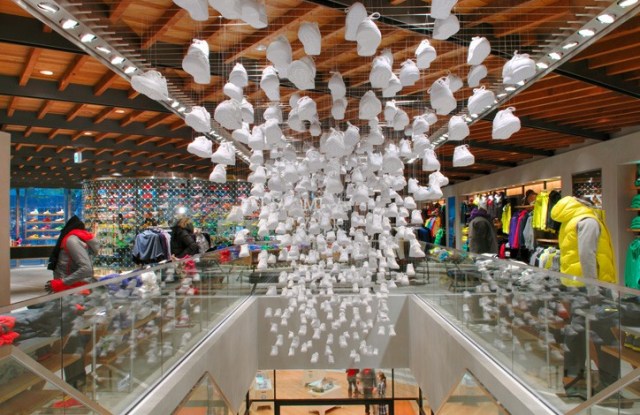 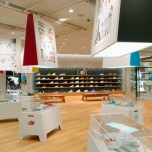 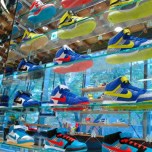 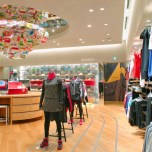 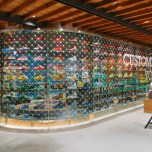 TOKYO — Nike has brought its signature swoosh to one of this city’s trendiest neighborhoods.

On Saturday, the athletic brand will open a sprawling new flagship in Harajuku, a district known for its cutting-edge street fashion and youthful clientele.

Jeanne Jackson, president of direct-to-consumer for Nike Inc., said the athletics giant had thought about opening a significant flagship here for many years. The store was in the works before the economic downturn, but Jackson said she’s still optimistic it will be successful. She declined to give a sale estimate for the store.

The store covers more than 10,000 square feet over three levels.

Japan-based Masamichi Katayama’s firm Wonderwall designed the interiors, which feature wood ceilings and floors and a generous use of glass displays and panoramic windows.

There are also some eye-catching accents. No fewer than 400 pairs of white sneakers are suspended from the ceiling of the second floor; a collection of race number tags revolve in a chandelier formation on the lower level. Wonderwall also played with textures, using chunks of shoe soles or pieces of waffle irons — the original inspiration for Nike’s sneaker tread — as a backdrop for shelving units.

The first floor houses the Tokyo chapter of the Nike Running Club and a high-tech gait analysis room, where runners can get feedback on their stride. Jackson said Nike purposely chose the Tokyo store’s location on Omotesando Avenue near sprawling Yoyogi Park, where the club will run four nights a week.

Much of the rest of the store is dedicated to customization services.

On the second floor, shoppers can take advantage of Nike’s largest NikeiD studio in Japan and customize apparel and footwear using computer stations and swatches of fabric and leather. The third floor houses a “Bootroom,” where customers can individualize soccer cleats in terms of fit, color, material, plate and embroidery.

When Nike reported its first-quarter results in September, it said sales in Japan were essentially flat compared with $186 million the year before. Excluding currency changes, Japan revenue would have been 10 percent lower.

First-quarter earnings before interest and taxes in Japan decreased 7 percent to $35 million. At that time, Nike said future orders in Japan through January 2010 were down 3 percent.

Jackson acknowledged market conditions are tough in Japan, which just emerged from recession. But it’s actually the perfect time to open stores and negotiate with landlords for the best locations, she said. Nike has a large wholesale business in Japan and a handful of its own stores. Its rival Adidas also has a considerable presence here. A large Adidas flagship is just around the corner from the new Nike store.

If the Harajuku flagship is successful, Nike will consider opening other larger-scale stores in Japan, Jackson said. Globally, the brand is evaluating locations on a case-by-case basis rather than targeting a specific number of stores, she said. The executive said the brand is planning to “refresh” its Niketown stores in New York and London while considering new stores in Los Angeles and Manchester, England.

As for China, Nike saw a 16 percent drop in first-quarter revenue in that country. Jackson blamed the slide on a combination of factors including last year’s pre-Beijing Olympic sales boost and the fact that retailers in the first part of this year were a bit “gun shy” about placing orders amid the global economic crisis. Nonetheless, she said China remains a key market for the brand and there is a “tremendous appetite” for its products in the country.