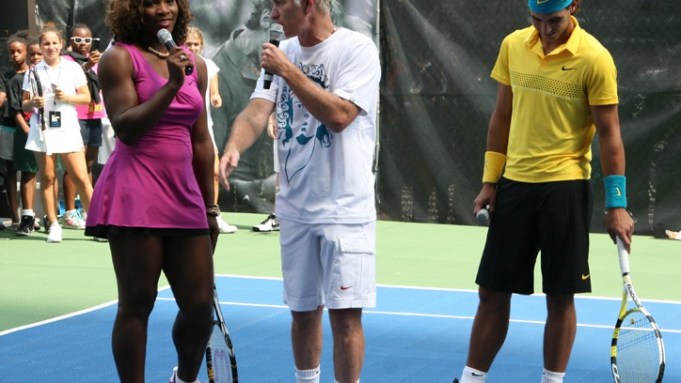 Nike INC. brought out some of its brightest tennis stars on Wednesday to preview their U.S. Open attire and raise money for local youth charities.

The company assembled a regulation-size tennis court right on Broadway, just below 23rd Street, and allowed hundreds of local youths to watch Serena Williams, Rafael Nadal, Roger Federer and John McEnroe in some light, on-court action. Four kids got a chance to receive coaching from the champions and play to win donations for their organizations.

“Who here wants to challenge Federer?” McEnroe asked the squealing audience. “Think you can take him? You cannot be serious!” He called Federer the greatest player ever.

Williams, Nadal and Federer donned the daytime ensembles they plan to wear in the U.S. Open, which starts Aug. 31.

Federer emerged first in a red shirt with a black collar and placket, matched with black shorts. Together with a nine-year-old girl, the pair racked up a $15,000 donation to the New York City Junior Tennis League by returning shots from a machine.

Serena Williams appeared in the afternoon in a fuchsia tank dress with a black underlayer that extended past the hem. An arc of stitching at the waist, black piping along the spine and a little ruching at the base of the neckline accentuated her curvy physique.

“I’m really involved in the design because I’ve been to school for fashion, so I know the ins and outs,” Williams said. “I really wanted something with a strong color and a great, feminine silhouette. It’s all about the line. And it was important to me that everyone would be able to wear it. All ages, all sizes.”

For evening matches, she will wear the same dress in the reverse colorway.

“I love black, and what more elegant color for night is there than black? We tried hard to make it reversible but it didn’t work out, so there are two dresses.” Williams accessorized with jewelry from her signature line, Aneres.

Outside, she and a seven-year-old boy returned shots, earning $15,000 for Mentoring USA.

Nike also displayed clothes designed for Maria Sharapova including, for night, a silver hoodie and a silver and black dress with sheer panels. For daytime, she will wear a dusty rose dress with neon yellow trim.

Except for Sharapova’s looks, all the clothes seen Wednesday will be for sale at retail after the tournament.

Nadal wore a yellow shirt, black shorts, a teal headband and wristband, and another wristband in yellow.

“You gotta be an awful macho man to wear those colors,” teased McEnroe. Nadal replied the yellow-taxi color was a tribute to New York. He and a young boy partnered for Athletes For Charity, then McEnroe and another boy played for New York City Parks & Recreation. Finally, McEnroe and Nadal volleyed, which concluded when Nadal blasted the ball over the fence, into the busy intersection.