No Nonsense Updates Its Message

The push for fashion will be aimed at women who shop at mass merchants such as Wal-Mart and national food and drugstore chains. 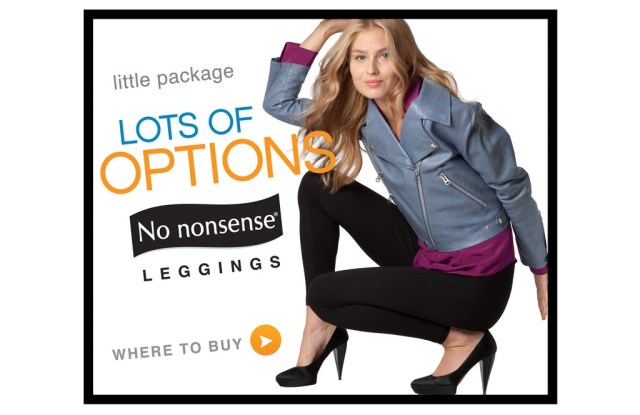 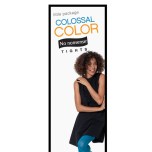 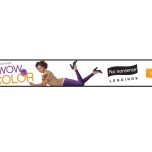 No nonsense hosiery is taking the heritage brand where it’s never been before: the world of fashion.

But the push for fashion will be aimed at women who shop for milk and mascara at mass merchants such as Wal-Mart and national food and drugstore chains including Rite-Aid, Kroger and Publix.

Long known for basic sheer legwear, No nonsense will be launching a major rebranding initiative beginning in October with tights and leggings in fashion colors, textures and prints.

The company has featured a smattering of fashion items in the past, but No nonsense officials now want to make the legwear relevant for modern women by repositioning the brand as a stylish, go-to fashion accessory, said Julia Townsend, executive vice president and general manager of parent company, Kayser-Roth Corp.

“I think of it as lipstick for the legs. We thought there are a lot of women who buy cosmetics and lipstick at these [discounters, food and drug chains] stores, and I want women to think of tights and leggings the way they think of cosmetics, because they’re very involved with the category,” said Townsend.

“No nonsense is an authentic brand and has a heritage of trust and quality for over 30 years….It’s known for sheer hosiery, but we want to make No nonsense relevant as a fashion accessory with a broad assortment of tights and leggings. And our retail partners are working hard to make this an accessory category.”

Tights, which will retail for $6 a pair, will be rendered in semiopaque and opaque styles in 21 colors such as mulberry, pear, red, grape and marine blue, as well as openwork lace and mesh effects.

“Our proprietary 18 points of fit innovation features a modern, tapered leg that won’t bag at the knees, and the new modern fit sits comfortably below the naval at the natural waist,” explained Townsend.

Several styles of cotton and spandex leggings feature a soft, nonbinding waistband for a casual fit in denim, corduroy, chino, allover smooth cotton and shaping silhouettes. The leggings will retail from $11.99 to $16.99.

Andrea Angelo, director of marketing for No nonsense, said, the goal is to make “great style easy, high-quality and affordable.”

“Our research has indicated a strong demand from consumers for more contemporary legwear choices, and we want every woman to have easy access to this hot new accessory, whether it’s a pair of bright tights or classic black leggings,” said Angelo.

The launch will be supported by a digital advertising campaign on media sites such as people.com, oxygen.com, bravo.com and ivillage.com, as well as six No nonsense tip videos with Jill Martin. Martin, who is a contributor for the “Ambush Makeover” and “Steals and Deals” segments of NBC’s “Today Show,” and is a New York correspondent for “Access Hollywood,” will educate women in the videos on how to wear leggings and colored tights. She will also be active on social media, providing fashion tips via Twitter and weekly blogs.

“The new packaging is very clean and modern looking and the photography is style specific. That’s important because it empowers women on how to wear the product, like we show a woman wearing ballerina shoes with leggings. We are trying to give styling clues to women who are not that familiar with using legwear as an accessory,” said Townsend.