Hosiery manufacturers are anticipating a strong finish to the fourth quarter at retail. 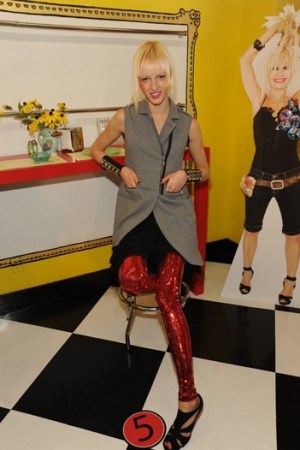 The legwear industry is looking to have some holiday cheer.

Based on early holiday sales, hosiery manufacturers are anticipating a strong finish to the fourth quarter at retail. Consumers are still craving inexpensive options to perk up their apparel, and legwear trends from the runways offer a modern appeal for fashion-forward shoppers.

Legwear sales in the U.S. have decreased 2.2 percent in the last year to $3.2 billion, according to consumer research firm The NPD Group. However, the tights category has provided a silver lining, growing 6.9 percent to $271 million. Retailers and manufacturers have maintained positive expectations, specifically in classic opaque styles and funkier, patterned tights.

Wayne Lederman, chief executive officer at Leg Resource, cited 25 percent growth in business over last year for his private label and licensed brands, which include Betsey Johnson and Nicole Miller. He said tights are driving the most business in all fabrics, such as microfiber, Modal, bamboo and cashmere. He also noted consumers are responding more positively to fashionable, slightly daring looks, notably from Johnson’s line, which retails at major department stores and Betsey Johnson boutiques.

“The novelty end of the legwear business is really the area that has experienced the most growth,” Lederman said. “As more people become interested in wearing tights, the fashion end of the business becomes more prevalent. It allows a woman to be on-trend for a very reasonable amount of money.”

Tony Taylor built his Look From London label around novelty legwear, in addition to producing highly stylized hosiery for Anna Sui. He said this season, more consumers are embracing the edgier elements of both lines, such as peacock displays, leopard prints and bright solids.

StockinGirl design director Edward Miccinati said the line was up 30 percent this fall over last year. For December, he anticipates 20 percent growth.

“Legwear in general is still trending quite strongly,” Miccinati said. “Our merino wool program has been the strongest classification for us, and I cannot keep our silk stay-ups in stock. These are at $60 to $70 retail and people are clamoring for them.”

Additionally, leggings appear to be the trend that keeps on giving this holiday. Julia Townsend, executive vice president and general manager of Kayser-Roth, which operates the No Nonsense and Hue lines, said the shape is driving double-digit gains this year.

“We offered over 20 styles and they are all experiencing huge sell-throughs, especially the basic cotton style, the jeans legging and the popular liquid version,” Townsend said. “Hue is also seeing strong sales for patterned sheers.”

At Henri Bendel, leggings with added features, such as detachable bows, zippers or sequins, are faring well. Scott Schramm, senior vice president and general merchandise manager of fashion, cited styles specifically from J Brand and DL Collection, both of which originated as apparel lines.

“People are looking at [leggings] as accessories,” Schramm said. “The price points are definitely approachable, the majority running from $88 to the low 100s and obviously very accessible. We’re also seeing classic denim resources working legwear into their lines. J Brand is doing a great job in the legging business, making the segue from a classic denim brand into a legging resource.”

At United Legwear, ceo Isaac Ash has been working to make Cynthia Rowley legwear stand out this holiday season at specialty stores. He launched a gift box program pairing Rowley’s metallic hosiery with her metallic socks.