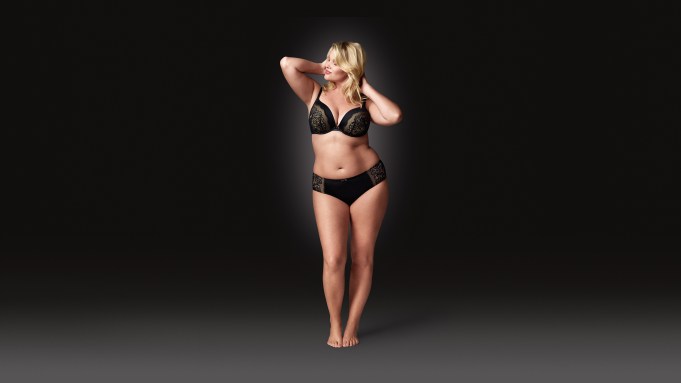 Olga wants to be known for more than providing comfort and solutions.

The full-figure intimate apparel brand, which was acquired by PVH Corp. in 2012, is introducing Flirty, a line of colorful and sexy bras and underwear for fall.

“We noticed some of the success that Lane Bryant was having in the specialty category with the sexier, more youthful bras for the full-figure customer,” said Les Hall, president of core intimates at PVH. “We thought how can we learn from that success and appeal to the customer that shops in chains and department stores.”

The line, which will be released this week online and in-store at select Macy’s and Kohl’s locations, includes four bra styles — a balconette bra, a deep plunge with extra lift, a deep plunge style with lace and an unlined underwire bra — along with a hipster panty. The bras retail for $45 and the panties retail for $12.50. Olga is also extending its sizes for Flirty. The bra band will go up to 46, it previously went up to 44, and the cup size will go up to G and H, it previously stopped at DDD. The panties, which used to go up to 2x, will now go up to 4x. While many retailers have relegated extended cup sizes to their e-commerce sites, Hall told WWD that Flirty will have a nice representation of sizes in-store.

The assortment also includes a baby doll produced by Vandale, which holds the license to sleepwear, shapewear, lounge, robes and sports bras for Warner and Olga. According to Hall, the baby doll has been trending high at retail for fuller cup sizes.

Although the line is decidedly more youthful than Olga — it features fashion colors and prints — Hall said it is targeting a younger attitude more so than a younger customer. The first season will be a test run, but Hall is hoping that the line will expand to additional Olga distributors for spring.