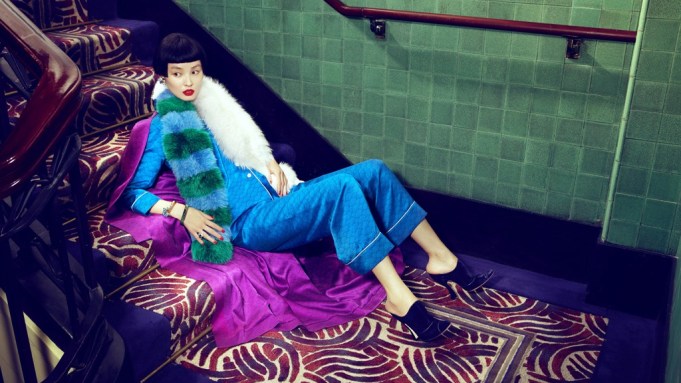 LONDON — “My Google news alert went nuts,” said Olivia von Halle, describing the day that WWD reported the story that David Beckham had purchased multiple pairs of her pajamas to give to his wife for Christmas.

“We had loads of sales through our e-tail site — with people spending over 1,000 pounds, or about $1,600, on several pairs of pajamas — and we picked up four new stockists by New Year,” she said.

With such an auspicious end to the year, 2013 looks promising for the London-based von Halle, who started her career forecasting trends at Future Laboratory and WGSN in London. She was working in Shanghai as a trend forecaster when the idea for luxury pajamas hit her.

“I had one of those forecasting moments that I’ve had since I was 12 years old, thinking, Oh my God, that’s what I need,” she explained. “And the best thing about being in Shanghai was that I could make it happen. I had a great tailor who would make me these silk pajamas. I loved them. I never took them off. I even wore them to my 26th birthday party with heels.”

The birth of her label was organic.

“We were partying a lot in China and often we would end up back at my flat for G and Ts [gin and tonics]. I would put on a pair of my pj’s for the after party in our flat and friends would ask me to make them a pair,” she recounted.

But it took snapping an ankle in six-inch heels followed by six weeks of recuperation on her parents’ sofa back in the U.K. for the business idea to really germinate. “Friends would come to see me and they’d be all, ‘Oh, poor you.…Oh, never mind that, what are you wearing?’” she said.

The requisite market research ensued and the label was born. “We spent three months trying to find the right factory and I couldn’t find the right fabrics, so I decided to manufacture them myself. It’s the best way to ensure quality and have beautiful prints,” said von Halle. She added that she found a manufacturer who handles every stage of production, from breeding the silk worms to the cutting and sewing of the pj’s.

The spring collection is available now and the fall collection will see kimonos introduced into the mix. Von Halle admits that China is a big part of the brand’s DNA, and the look book — which features Chinese models Miao Bin Si and Gao Ying — was styled by Leaf Greener, senior fashion editor for Elle in China.

The fall collection is influenced by Coco Chanel, the Twenties and Art Deco. The silk jammies, which retail between 280 and 330 pounds, or $448 to $528, feature von Halle’s exclusive prints as well as handmade piping and French seams for added luxury.

Her next move will be cotton silhouettes, but it will be very upscale, such as a Sea Island quality of cotton. And while she picked up two specialty boutiques in the U.S. in the post-Beckham dervish, she is on the hunt for a U.S. department store to stock her wares.