Omsignal has seen the future of wearable technology, and it's apparel. 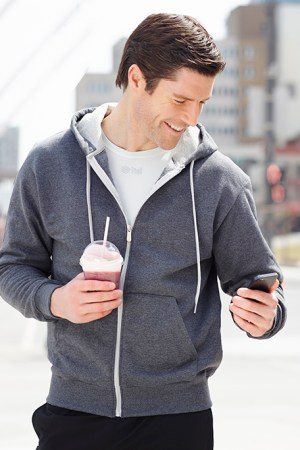 Omsignal this week named Shaz Kahng, the former president of Lucy Activewear, to its board of directors. Kahng told WWD that she’ll be taking an active role in the company. “Omsignal is strong on the technology side, but hasn’t had as much exposure and experience on the retail and apparel side,” she said. “I’m helping them refine their business strategy and approach. I’m giving them entrée to companies they’re interested in talking with and I’m helping them learn the lingo and the business of retail and apparel.”

Omsignal, whose core business is gathering and interpreting biological signals, powers brands like Lauren with technology that reads signals via sensors knitted into products. “We’re an ingredient brand,” said Stephane Marceau, cofounder and chief executive officer of Omsignal. “Our focus is to work with major brands and help them seize this moment of disruption.”

The company aims to cause some disruption of its own. A collection of OM compression shirts sold with little black boxes that transmit data from the smart shirt to an iOS device is available for $249 on Omsignal’s Web site. The shirts are currently available for men only.

“Clothes have advantages over other wearables,” said Marceau said. “With smart textiles you can wear signals anywhere on the body. Right now, with our shirt we can capture deep biometrics and data usage. The platform is built to send biometrics to medical partners with full consumer consent, of course.”

Joanna Berzowska, head of electronic textiles at Omsignal, created fibers imbued with electronic properties that “disappear into the background,” she said. “It’s a trade-off between fit, style and the biometric possibilities. A lot of consumers want to monitor their heart rate, so our shirts give ECG. I think breathing is most important. There’s so much we can gain by learning to breathe better. The idea is to make garments and not have to strap all kinds of gear on our bodies.”

Smart apparel has historically appealed to elite athletes and sports enthusiasts, but Omsignal hopes to broaden the market. “Omsignal wants to expand to general wellness so the average person can monitor their biometrics,” said Kahng, who was Nike’s global director of women’s training and prior to that, one of three product leaders for the launch of Nike +.

The company’s small design team has been approaching apparel from the standpoint of fit and function, but Kahng said it’s time to bring in designers. “As they evolve the design aesthetic, the appeal of the products will broaden,” she said. “Smart apparel is really the next step, where you use apparel as a dashboard for your own body.”