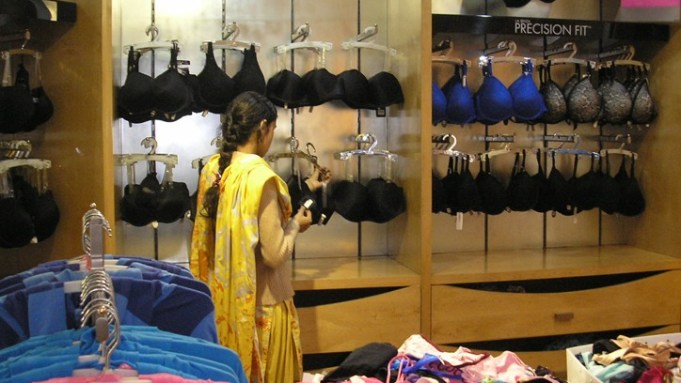 LAHORE, Pakistan — The shift toward more Western dressing in women’s foundations here has increased in recent years and La Senza has been the main supplier. But while the desire for fashionable undergarments among Pakistan’s younger generation shows no signs of waning, the brand’s five-year run in the country may be nearing an end as a result of disagreements over financial terms with its local partner.

Traditionally, women have only had two choices of commodity-type lingerie in Pakistan’s ultraconservative Muslim culture: the long-established International Foundations & Garments company, which is the sole manufacturer of women’s undergarments for the entire country, and imported bras, corsets and undies from Triumph International, which is headquartered in Switzerland.

But in 2005, La Senza, a division of Limited Brands Inc., entered the Pakistani market through a franchise with a limited yet racy assortment of fashion product, and the lingerie scene livened up despite regular monitoring by the local religious police. However, it’s difficult for shoppers to see the merchandise in store windows as merchants are required to cover storefronts with barriers and signs that say “Only For Ladies.”

The introduction of La Senza’s fashionable bras and undies was the brainchild of Shehryar Buksh, managing director of Haji Karim Buksh, a department store chain throughout the country. With La Senza being the only brand to advertise its products with Western lingerie models on billboards and in print ads — a never-before-seen sight in this conservative country — urban woman flocked to the stores. Even many women veiled from head to toe couldn’t resist the allure of fashionable lingerie, and today women are frequently spotted behind closed doors purchasing items such as fake fur-trimmed bras, undies and nighties in bright colors.

Most of the colorful fashion garments, which are sold to younger women, are made in Sri Lanka or China, and are sent from the regional distribution center in Dubai.

“The plan was to roll out 15 stores in five years,” said Buksh, who noted five franchised La Senza shops have sprouted in two years. “The greatest demand is for unpadded bras and sleepwear in cotton, and our customer base is mostly in the 22-to-35 age bracket. Unfortunately, La Senza has a push-up bra style for which they don’t take into account our customer demands, so our highest sales are in padded bras in smaller sizes at an average selling price of $12 per bra. During the winter wedding season, silkier intimates sell more.”

Despite the popularity and growing appetite for sexy-looking lingerie, Buksh said he is reluctantly discontinuing the La Senza franchise.

“We are terminating the franchise with La Senza and Limited Brands in the next six months as they now require us to generate [annual] sales of $250,000 per store, plus pay an additional 60 percent import duty,” he said. “That is unfeasible for us.”

Limited Brands officials in the U.S. said, “With La Senza stores in more than 40 countries, franchisees choose to open and close stores for various commercial reasons.”

Moreover, the Pakistan rupee has devalued by 35 percent in the last year, hitting disposable incomes and raising the average selling price for the same La Senza product by 50 percent.

Regarding future partnerships, Buksh said: “We are looking for another international intimates brand with which to work since there is no competition here in branded intimates at this price point.”

According to Pakistan government estimates, the potential is untapped. Pakistan’s population was more than 176 million in 2009, with upward of 40 million middle-class workers earning on average $10,000 a year. Females in the 15-to-64 age range account for 50.4 million, while women over 65 total 3.9 million. The median age of women is 21.

Meanwhile, Pakistani women may have to revert to basic white bras and undies if more lingerie fashion brands don’t enter the marketplace this year.

Traditionally, the prices for bras and undies manufactured by the International Foundations & Garments company, as well as Triumph, are extremely low. Bras retail as low as $1.50 for a basic white cotton style produced locally, while simple nylon and net bras sell for $2 to $9. Triumph bras, which feature mostly basic styles, sell at the median price of $10. Underwear, which starts at around $1, generally looks like a Fifties redo of rudimentary, full-coverage briefs.

The majority of basic undergarments are geared to older women who tend to be full figured, so the lion’s share of bras are plain and unpadded with few styles available in cup sizes D or above. Additionally, Chinese undergarments, mostly bras retailing at $2, are imported into the country for everyday use. Thai sleepwear and underwear in synthetic fibers in the $10 to $20 range are brought in and mostly smuggled from Bangkok in the $10 to $20 range, and distributed to all the major retail stores. These items are purchased primarily for bridal trousseaux.

Sizing up the need for Westernized fashion undergarments, Buksh said: “Pakistan is the 27th largest economy in the world in purchasing power, with a growing female population getting educated, joining the workforce and having personal income. International lingerie brands adequately meeting their demands are urgently required.”