The former “Baywatch” star has signed a global licensing deal with Secrets in Lace to produce, market and distribute the Pamela Couture Collection. 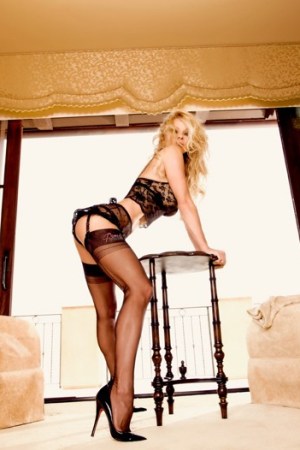 Pamela Anderson is making a comeback in the intimate apparel arena after a seven-year hiatus.

The former “Baywatch” beach babe and Playboy Playmate has signed a global licensing deal with Secrets in Lace to produce, market and distribute Anderson’s first collection of stockings as well as lingerie. The legwear, which has a retro glam look with lots of sexy-looking back seams and Swiss dots, will be called the Pamela Couture Collection. The line of five styles features Anderson’s signature logo knit around the stockings underneath the welt. A collection of lingerie will be introduced in 2012.

Both the stockings and lingerie will be sold at secretsinlace.com, which also sells two other bombshell brands — The Dita Von Teese Collection of stockings, and The Bettie Page Lingerie Collection, which features vintage intimate apparel items such as garter belts, open-bottom girdles, bullet bras, sheer undies and full-cut panties. Page was a pin-up girl with a cult following in the Fifties.

A preview of Anderson’s stockings was unveiled on secretsinlace.com this week. Colors include copper, beige, black and coffee. Prices range from $29 to $39.

Regarding the new venture, Anderson said, “I am very pleased with the initial collection. I love every one of the styles because they cover every fashion occasion.…I’ve always loved lingerie. I like to dress up. Fantasy is something I respond to. There’s a time and a place. Usually if I can’t find a place, it’s not worth my time.

“I have an incredibly diverse collection of lingerie,” continued Anderson. “I actually have too much tucked away in storage. I haven’t bought lingerie in a long time…building my house took much longer than it should have. Now it’s done, it will be a wild playground soon enough, my lair, my boudoir. Anyone who enters — beware.”

Anderson’s legwear collection is projected to generate retail sales of $500,000 the first year, said Daniel Whitsett, president of Secrets in Lace. He noted that Anderson’s line will also be featured in more than 450,000 Secrets in Lace catalogues annually.

The Leesburg, Va.-based company has specialized in 100 percent nylon stockings and coordinating bras, garter belts and panties since 1984. The company will launch a Web site, secretsinlace.co.uk, for the U.K. market in August, and a third site, secretsinlace.co.eu, is being planned for the European market, which accounts for 35 percent of total business.

As for Anderson’s marketability, Whitsett said, “We liked the idea that Pam is very into being a mom with two boys and very into being a woman.…We’ve been very active and successful with retro looks. All of our 15-denier and 10-denier stockings are made with machinery from the 1950s, and the yarn is 100 percent nylon because Lycra can’t be used with these machines. We like to say ‘guaranteed to run’ because the deniers are so fine,” said Whitsett. “Dita [Von Teese] has been a customer of ours since we first went online in 1995…she approached us to do a stocking deal.”

Meanwhile, Anderson said she is infatuated with the idea of stockings that are guaranteed to run — “if you put [the stockings] to proper use with Cuban heels, sexy black seams and garters.”

Sleepwear will be part of her lingerie line, with items like short baby dolls and sheer playful nighties. “I’m just going to create what I want to wear.…Don’t fear sexy, embrace it and take risks. Be sexier than your fantasy of what a sexy girl is to you.…Life is short.…Leave a mark on any man you encounter — not just bite marks — but sexy mental scars,” she said.