She also will consult on the brand’s product offer, which is due to expand to fitness and other board sport categories. 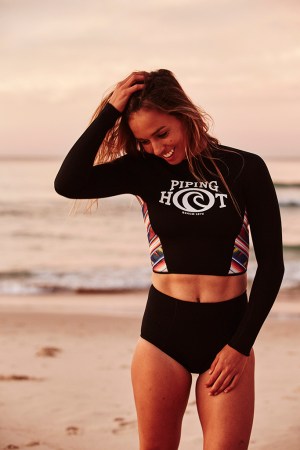 SYDNEY – Sally Fitzgibbons is the new face of Piping Hot.

The 24-year-old Australian surfer — now ranked number three in the world after winning her second consecutive Fiji Women’s Pro at Cloudbreak in Fiji on June 4 – has been named an ambassador for the surfwear brand, which was acquired by L.A.-based Saban Brands in March for an undisclosed sum.

The deal with Fitzgibbons, which Saban Brands managing director of strategic business development Daniel Castle described as “long term,” will see her appear in a new Piping Hot campaign in print, outdoor and online beginning at the start of the Australian summer at the end of this year. She also will consult on the brand’s product offer, which is due to expand to fitness and other board sport categories.

“We are very excited to have her contribute to our brand in more than an ambassador way, but also to show us where she thinks certain voids in that market [are] that other larger brands are not paying attention to,” said Castle.

Founded in 1975 in Torquay, Victoria, for the past 17 years Piping Hot has had an exclusive distribution deal with Target Australia, selling 22 product categories including surfboards, swimwear and footwear, with annual revenues of reportedly more than 80 million Australian dollars, or $61 million at current exchange.

Castle said a male Piping Hot ambassador will be named in due course. Wider local, and from January 2017, international, distribution will also be rolled out.