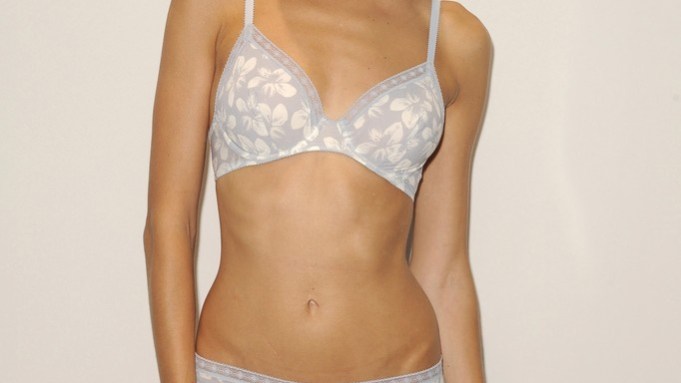 PARIS — What a difference a year makes.

Show organizers and exhibitors breathed a sigh of relief at the Salon International de la Lingerie and Interfilière, which opened to a crush of visitors waiting to enter the Porte de Versailles venue. It was a contrast to last year’s fair that had been blighted by bad weather, with many preregistered visitors unable to show up because of snow.

The ambience at this year’s edition, which was held Jan. 25 to 27, was upbeat despite reports of flat to slightly negative business in 2013. The main reason was innovative product and high-end craftsmanship.

Marie-Laure Bellon-Homps, Eurovet’s chief executive officer, summed it up this way: “2013 was stronger than 2012 for the lingerie industry, which performed better than apparel as a whole.”

Eurovet declined to divulge visitor numbers, saying only that attendance grew compared with year-ago figures. However, it was noted that turnout of SIL’s core target — lingerie retailers — grew 14 percent, while the number of French retailers was up 21 percent and accounted for 41 percent of total attendees.

Exhibitors at the fair said they were bullish about business for fall and early 2015.

Olivier Piquet, managing director of Lise Charmel, acknowledged the company’s business had been flat in 2013, due primarily to the economic downturn in Europe. But he was optimistic about demand for fresh ideas, high-end finishes like embroideries and luxe laces. “We are investing in the best fabrics and working relentlessly on design to develop new forms and increase comfort,” said Piquet.

The company is seeing growth in markets such as the U.S., where it opened a subsidiary two years ago and recently signed on with Neiman Marcus, which ordered the brand’s Epure group for spring. For fall, Epure’s offerings include mix-and-match basics in peach and gray, retailing from 110 and 140 euros for a set, or $150 and $91 at current exchange.

Meanwhile, upscale brands that focus on French lace, Swiss embroideries and silk have been more resistant to the economic downturn than mainstream ones, said vendors.

Franz Kraatz, managing director of Singapore-based Robinsons department stores, noted, “We’ve had very good results [with luxury lingerie], so we are pushing in that direction.” The retailer recently added high-end brands like Agent Provocateur to its mix at its new flagship in November.

“The high-end lingerie brands are doing well, but the midmarket brands are going down,” Meyer observed.

His sentiment was reflected by designer brands like Chantal Thomass, which reported strong demand for its more expensive pieces. The fall collection includes key items like a Rendez-Vous silk bustier, with suggested retail of 360 euros, or $491.

The appetite for what European brands and suppliers do best — especially lace and embroidery — is growing in the Asia and U.S. markets, which have traditionally been more conservative.

Chantelle’s president of North American and U.K. business Sonja Winther said sales of lace undergarments have been growing in the U.S. since 2012.

“We’ve had some lace lines that have been very successful as women [in the U.S.] embrace more femininity, more lace and more bows,” she said.

Groupe Chantelle will be expanding distribution for its fashion brand Passionata in the U.S. this fall, and plans are to grow the brand’s presence from 10 retail accounts to 100, added Winther.

Also in the mix were lots of new technical developments at Interfilière, where German bra cup specialist Muehlmeier was promoting its latest development — M-Tec, a composite material intended to reproduce the sensation of the natural breast. The brand was also offering new concepts for support and functionality in wire-free bras.

Wacoal unveiled its latest developments including shapewear with screen-printed patterns that combine comfort with a lighter-weight microfiber.

In other developments, SIL dedicated a new venue for legwear and men’s innerwear. Exhibitors said they had been apprehensive about the new initiative but were pleased with brisk traffic.

“We were worried we would not benefit from the traffic in the women’s section, but in the end we have seen more people than in previous years,” said Estelle Ribe, export manager of men’s brand Eminence. She said there was “strong interest” from new markets including Canada, Thailand and South Korea.