The brand is on the hot seat over its sponsorship of the rapper, who serves as spokesman for its Classics line of sneakers. 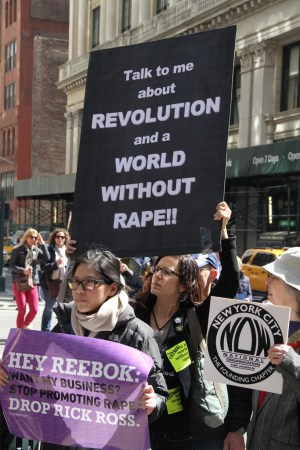 NEW YORK — It doesn’t look like Reebok International Ltd. is receiving Champagne wishes and caviar dreams for its sponsorship of rapper Rick Ross, who serves as spokesman for the brand’s Classics line of sneakers.

Instead, the athletic brand received a different kind of reception Thursday afternoon: More than 40 protestors stood in front of the Reebok Fitness Hub on Fifth Avenue here holding placards saying “Hey Reebok: Want my business? Stop promoting rape,” while chanting “Reebok drop Rick Ross.” The protest was organized by UltraViolet, an activist organization against sexism, which has put Reebok on the hot seat over its sponsorship of Ross. The main point of contention is the lyrics in a song he raps on, titled “U.O.E.N.O,” in which the protestors said Ross describes drugging a woman’s Champagne with “Molly,” or Ecstasy, and having sex with her without her knowledge or consent.

The goal of the gathering was to present Reebok officials in-store with a box containing 72,000 signatures from consumers who want the athletic powerhouse to drop Ross because of his controversial lyrics, which they believe condone rape.

But the box never got past the front door, as Reebok security men blocked the entrance.

Asked why they wouldn’t let a woman into the store to deliver the petition, a security guard replied, “Because there are customers in the store.”

Reebok officials did not return phone calls or e-mail queries.

However, Ross tweeted a statement that said, “I don’t condone rape…apologize for #lyric interpreted as rape.”

Shaunna Thomas, cofounder of the UltraViolet organization, which has 400,000 members, acknowledged that the entertainment industry often uses controversial and provocative material but said, “it was time to draw a line.”

“We’re doing this because of his [Ross’] high profile in the hip-hop industry, and because we felt it was our responsibility to say it’s wrong, that rape is wrong. But he’s being rewarded with sponsorship dollars by Reebok,” said Thomas. “It’s the first time we’ve ever attempted to deliver the petition. Reebok has been feeling a lot of pressure, more than we expected.”

Alicia Barksdale, a candidate running for Council in New York’s District 7, said she was protesting because she was “offended” by Ross’ lyrics and Reebok’s support.

“It’s not OK for someone to say it’s OK to rape someone,” said Barksdale.

Sonia Ossorio, president of the New York chapter of NOW, said Reebok “must be held accountable for standing by someone who condones rape.”

“Reebok is one of the oldest athletic brands in America. We want an explanation as to why Reebok would be in business with someone who is associated with a hate crime. Reebok’s ceo [Uli Becker] won’t even talk to us,” said Ossorio, who has taken a stand against sexism in the liquor and fashion industries in the past.