Puma and Balmain Collaborate on Collection With Cara Delevingne

The model worked with her close friend, Balmain creative director Olivier Rousteing, on a 35-piece collection that will launch on Nov. 21. 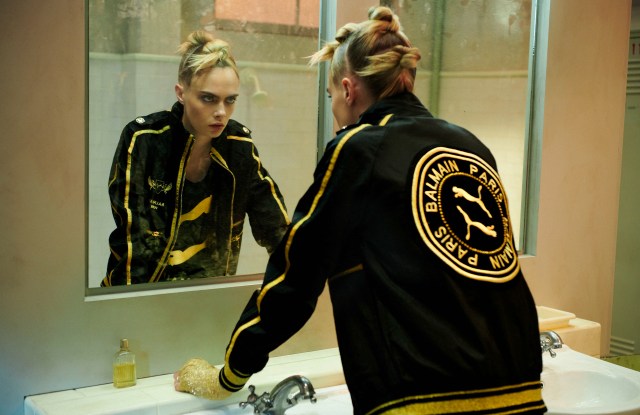 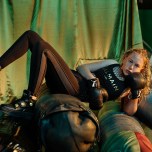 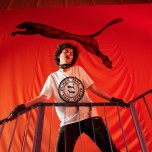 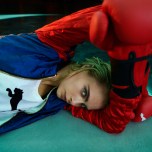 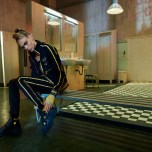 PARIS — Olivier Rousteing and Cara Delevingne have extended their partnership to clothes, collaborating on a boxing-inspired capsule collection for Puma and Balmain set to launch on Nov. 21. It’s the French luxury brand’s latest foray into the high-street segment.

The pair, who are close friends, have previously appeared together in an advertising campaign for Balmain. The model also teamed with the designer this year for a collection of three quilted leather Balmain handbags with gold details, but this is the first time they have worked together on clothing.

It also marks the first time Delevingne has designed a collection for Puma, having worked with the German sporting goods maker since 2016, namely on its “Do You” campaign, which is designed to empower, inspire and support women worldwide.

“It’s really born out of our friendship. She asked me to work with her on this collection with Puma. We had a very clear point of view because we both love boxing,” Rousteing told WWD. “We also wanted to use this collaboration as a platform to promote diversity and inclusivity.”

The 35-piece line of footwear, apparel and accessories is split into two subcollections, some produced and sold by Puma, others by Balmain, and some that will be carried by both brands in addition to select independent retailers.

“I’m such a fan of Olivier’s work and talent that I knew this would be a fun one. The collaboration between Puma and Balmain felt simple because both brands really celebrate powerful women,” Delevingne told WWD.

“I’ve collaborated on design projects before. The difference with this is, it came from an idea I had a long time ago. It started off as a metaphor about how I used to feel. Identity, internal conflict, self-love, love and hate. Trying to figure out my own emotions. When you see someone and you don’t know if they are crying or laughing. I like how this collection is based on a story and feeling,” she added. 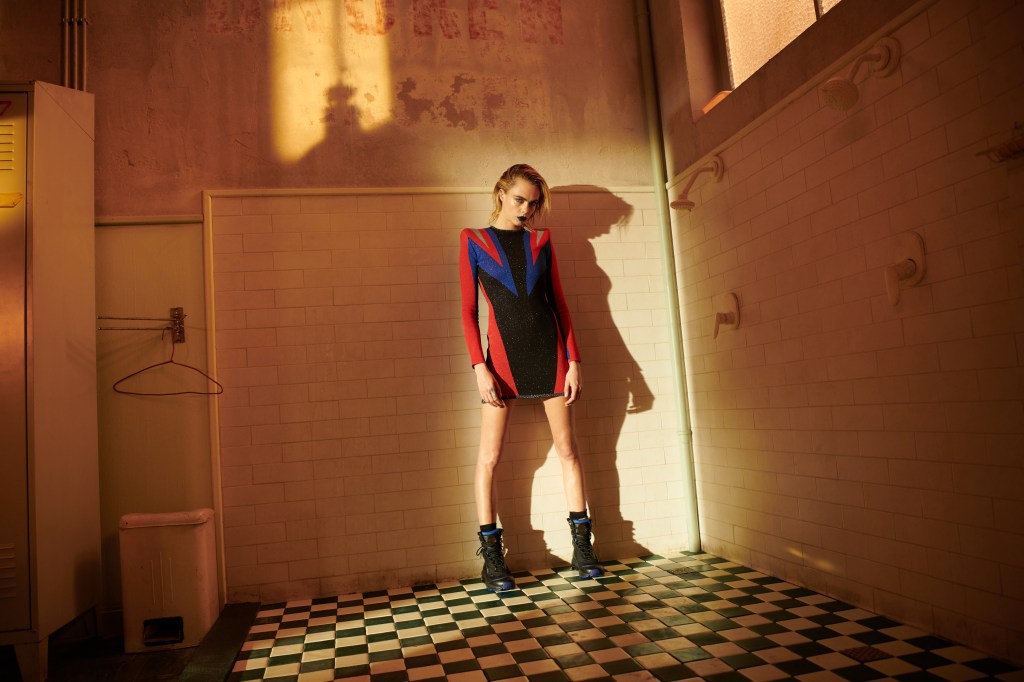 Cara Delevingne in one of her designs for Puma x Balmain.  Courtesy

The clothes mirror Delevingne’s personality, spanning from a black and gold tracksuit to a graphic minidress with angular shoulder pads. Sneakers feature Balmain signatures such as gold buttons, while tops included shredded versions of the brand’s trademark sailor-stripe hoodies and T-shirts.

“Cara can be a tomboy one moment, and very glamorous the next, so it’s a really balanced mix of her personality. She’s equally at home on the red carpet as she is on the streets of London or Los Angeles,” Rousteing said.

“She has a very clear fashion vision, so she’s also very attentive to what she creates. She has a strong point of view, which is great, because it was a real exchange,” he added. “With Cara, we sit down together, we draw, we call each other, we WhatsApp, we Skype. We work together any way that’s convenient.”

They both share a genuine interest in boxing, which Rousteing practices five times a week when he’s not prepping for a fashion show. “It’s a total release and it allows me to get rid of my energy, both positive and negative. Boxing is extremely constructive to feel more calm in the face of life’s problems,” he said.

Delevingne said the sporting theme was also a reflection of how she feels.

“It’s not just about boxing, but about dancing, fighting, conflict, connection — the boxing ring of life. I do box and do Muay Thai a lot, so I have a major passion for the sport, too, but it’s deeper than that. It’s not about violence at all. It’s about how we treat ourselves,” she explained.

She appears alongside a diverse cast of models in a boxing-inspired interactive campaign photographed by New York-based Brianna Capozzi, who is known for her images drawing on feminist themes within contemporary popular culture. Creative direction is by Philippa Price, who has frequently worked with Rihanna.

“A lot of people in the campaign have faced discrimination because of their choices, whatever those may be, and it was important for us to have a really natural cast,” Rousteing said of the video and photos.

While Puma has collaborated with streetwear brands such as A Bathing Ape, the Karl Lagerfeld maison and celebrities including Rihanna, Kylie Jenner and Big Sean, this is the first time it has joined forces with a luxury brand. Björn Gulden, chief executive officer of Puma, hinted the collaboration could be renewed.

“To be able to mix Puma’s sport heritage with Balmain’s historic couture legacy really took this collection to the next level. We look forward to continuing a partnership with both Cara and Balmain in the future,” he said.

For Balmain, it represents another opportunity to capture young consumers, following its highly successful collaboration with Swedish fast-fashion retailer H&M in 2015. The brand has also launched accessibly priced lingerie with Victoria’s Secret, and makeup with L’Oréal Paris and Kylie Jenner.

“The Balmain universe speaks to a whole generation of young people who don’t necessarily always have access to these types of products, so it’s always important to me to be able to offer products at different price points so that they are able to wear a Balmain piece from one of our collaborations,” Rousteing said.

The brands will celebrate the launch with a party in Los Angeles on Nov. 21.

For Kris Jenner, Balmain’s Olivier Rousteing Is ‘Like Family’

A Look Back at Balmain’s Fashion Collaborations