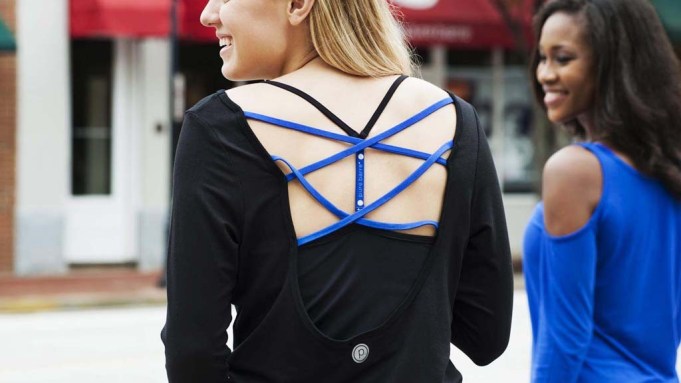 NEW YORK — Pure Barre, a total-body workout that uses the ballet bar, which has more than 250 studios in the U.S., has launched its first clothing line, Pure Barre by Splits59. The collection will be sold exclusively in studios and on its Web site.

It will be distributed to the studios starting next week, and will be sold online beginning in early October.

The collection is comprised of seven activewear styles that include tanks, pullovers, wraps, fitted leg warmers and tights, and is offered in a palette that includes orchid, steel gray, azure blue, white and black. The pieces are made to mix and match and are designed to create multiple combinations.

Among the pieces are the Lynx Tank, which has a built-in bra and adjustable straps; the Hydra Pullover, which has cross back straps for layering; and the Gemini Tight, with an adjustable waist so you can wear it three different ways. The collection retails from $65 to $100. Four collections will be introduced a year. There are no plans to make pieces available to other retailers, said a spokeswoman. First-year projections weren’t disclosed.

“Pure Barre is more than just a workout; it’s a lifestyle, so expanding our offerings into a clothing line that reflected that was the obvious next step,” said Amy Tankersley, vice president of product and retail strategy at Pure Barre.