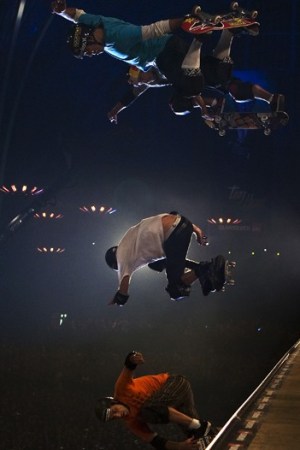 PARIS — The Grand Palais, the elegant glass-domed exhibition hall here that is home to Chanel fashion shows, art exhibitions and swanky antique fairs, took on a different character last weekend as surfwear giant Quiksilver celebrated its 40th anniversary, complete with what was billed as the biggest vert ramp in Europe.

Over two days, thousands of skate and extreme-sport enthusiasts wheeled their way to the event to catch a glimpse of Tony Hawk and Kelly Slater, along with a fashion show and a live art performance by graffiti artist-nightclub impresario André Saraiva.

“It brings together skate, music and art,” said Quiksilver chief executive officer Bob McKnight. “We are excited to celebrate [the] anniversary with the greatest global athletes who create the story of Quiksilver.”

Along with Slater, Reese Forbes, Alex Olson, Jérémy Florès, Robby Naish and Kassia Meador were among the brand’s ambassadors who took to the runway or ramp for Quiksilver and Roxy, the Huntington Beach, Calif.-based firm’s women’s label. They then gave way to Hawk and his crew, Sergie Ventura and Jean Postec, who wowed fans with their skating skills.

Chichi Menendez of Fandango.com teamed up with Quiksilver to mount an exhibition chronicling 40 years of urban, sport and surf fashions — from psychedelic board shorts to today’s high-tech helmets with built-in MP3 players.

A seven-time surf world champion, Slater has been sponsored by Quiksilver for 19 years and said he just inked another five-year contract that could include a signature clothing line.

Other Quiksilver brand ambassadors are pursuing collections under the company banner. Meador is the second female surfer after Tory Bright to design a collection for Roxy. It’s slated for spring-summer.

“I have just designed a wetsuit line, and am designing a signature line with T-shirts and leggings,” she said. “Everything is in a gray scale. It’s for the urban surfer.”

Team riders Forbes and Olsen are working on a new line of skate gear and denim for Quiksilver for fall 2010.

“Everything will be rider focused, so it’s good to include the riders in the clothing process,” Forbes said. “Our denim has a feature called Coolmax, that’s integrated into the clothing so one can skate and sweat all day.”