The flag bearers for the Olympics and Paralympics will wear special cooling jackets created just for Team USA.

Ralph Lauren will be doing its part to keep U.S. athletes cool during — and after — the Tokyo Olympics.

The temperatures in the host city during the upcoming Games are expected to average 95 degrees with humidity of 60 to 80 percent — making them among the hottest Olympics on record. And with COVID-19 cases rising in Tokyo, the city in a pandemic state of emergency for the fourth time and all spectators banned, the challenges continue to mount for those who are competing.

RL Cooling, which the flag bearers will wear during the Olympic and Paralympic Opening Ceremony parades, is a self-regulating temperature cooling device that is integrated into the garment and monitors temperature. When skin temperatures rise, the device, which employs the same technology used to cool computer systems, emits a cooling sensation that athletes can feel immediately.

Although only the flag bearers will have RL Cooling jackets for the Opening Ceremony, all athletes will receive the cooling device to fit into their blazers after the Games conclude.

David Lauren, chief branding, innovation officer and vice chairman of Ralph Lauren Corp., said the idea of introducing “personal thermal management” at the Olympics is intended to “start a conversation” about sustainability, a major mission for the apparel brand.

“Everybody is focused on the environment and this is going to be the most sustainable Olympics ever,” he said. The idea of air-conditioning big stadiums or large offices cannot continue if we want to save our planet, Lauren said, and ideas such as this are the first step toward addressing the effects of climate change.

The jackets that the Olympians will receive will not be commercially available immediately, but will serve to shine a light on the issue, he said. But ultimately, Lauren believes this technology can be employed in everything from men’s sport coats to T-shirts in the apparel space. 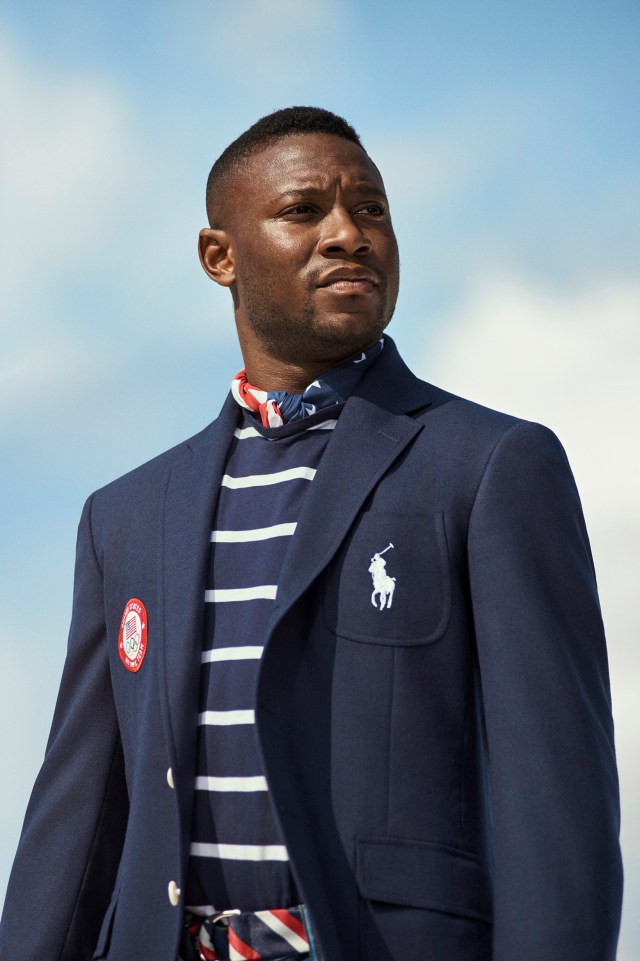 “The idea of being cool and feeling cool is not so far in the future,” he said. “It will get simpler, but it’s coming.”

And there’s no better place to showcase it than the Olympics. Lauren said the Opening Ceremony is the “ultimate fashion show” for American athletes and the best place for them to show off some good old U.S. innovation. He said although the athletes have been doing their best to prepare for the climate in Tokyo, it hasn’t been easy.

“It’s so humid in Tokyo, it’s like soup,” he said. “They’re going to be on a global stage and they’ll all be sweating profusely. We want our athletes to feel good. And when they leave the Olympics, they’ll keep these jackets forever, so they’ll be truly special.”

This is not the first time Ralph Lauren has used technology to enhance the experience of athletes preparing for the Olympics. During the 2018 Winter Games in Pyeongchang, the company introduced a heated jacket by working with Advanced Research Projects Agency-Energy, an agency of the U.S. Department of Energy, to create a heating element to keep athletes warm. “The athletes really liked it and it provided a real benefit for them,” he said. “It made them feel very comfortable when they were getting ready for the Games.”

He said the heated jackets, which are still available to the public, sell well and the goal for the future is to employ that technology in jackets made from lighter-weight fabrics.

The introduction of RL Cooling is one of several innovations from the company including Color on Demand, a dyeing platform for coloring cotton, and an investment in Natural Fiber Welding, Inc., a sustainable material science company that converts plant fibers into patented, high-performance materials. 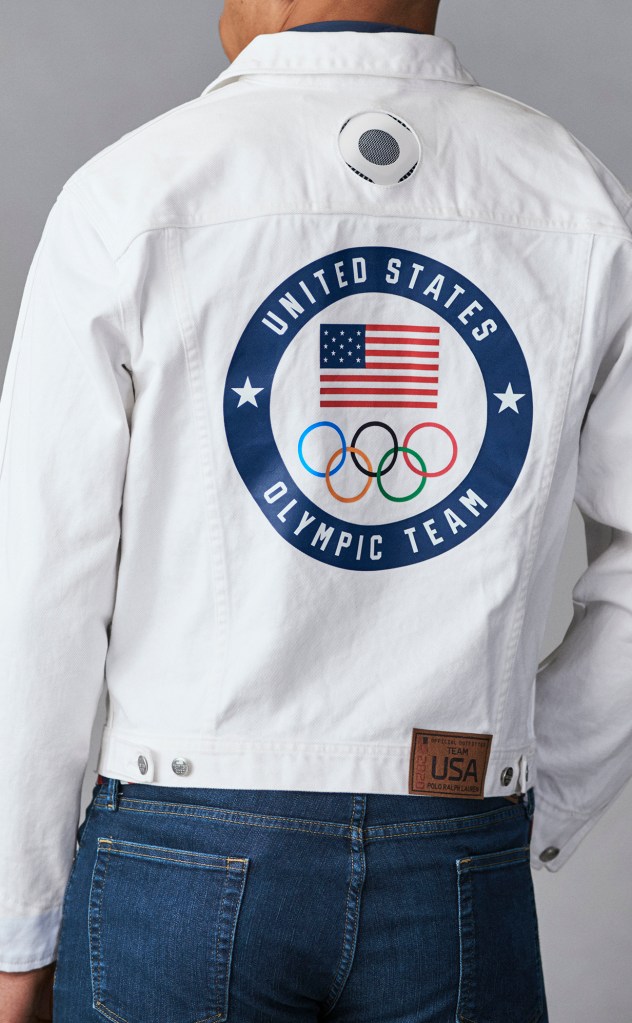 Team USA’s Opening Ceremony Parade uniforms incorporate sustainability into each piece. The navy blazer is made from U.S.-grown wool; a striped T-shirt features Ecofast Pure, a pre-treatment by Dow that uses less water, chemicals and energy to dye cotton, and a striped belt made with Repreve, a recycled polyester made from plastic water bottles. The denim pants feature a back patch made from Mirum, a leather-alternative, and the entire uniform is manufactured in the U.S.

The Team USA Collection is available for purchase at select Ralph Lauren retail stores and U.S. department stores as well as online at the Ralph Lauren and Team USA web sites. Ralph Lauren has been an official outfitter of Team USA since 2008.

Peter Zeytoonjian, senior vice president of consumer products at U.S. Olympic and Paralympic Properties, said: “Ralph Lauren’s dedication to providing innovative, sustainable and functional outfits for Team USA athletes helps elevate their Games experience. As our Olympic and Paralympic athletes step out on the global stage this summer, we’re proud to have the continued support of a brand whose thoughtful approach to how they can better serve our athletes uniquely benefits Team USA.”

One athlete who will benefit from the RL Cooling technology is Ralph Lauren ambassador Jordyn Barratt, a California-based skateboarder who will be competing in the women’s skate park division in Tokyo. Barratt won’t be able to walk in the Opening Ceremony because she’s not leaving for the Games until July 28. “We’re not allowed to be there any earlier,” she said, adding that her event is slated for Aug. 4. But that’s OK with her since at least the Games are on.

With skateboarding making its debut in Tokyo, Barratt will be among a select few to be able to showcase their sport on an international stage. “It’s insane,” she said. “It’s something definitely special that I can say, for the rest of my life that not a lot of people will be able to say. So I’m very excited for it.” And Barratt, who has been a Ralph Lauren ambassador for over two years, hopes the cooling jacket will help her better prepare for hot conditions anywhere she competes. She called the technology “genius,” adding: “It’s going to be so hot there, so anything will help all of us is great. And it makes the Olympics feel even more special to me.”

Barratt said despite the added exposure, she’s looking at the Olympics like any other competition — with a little bit of a twist because of the location. “I try to keep everything very similar to a normal skate contest but I’ve been working out a little extra trying to get my lungs ready for the heat. I traveled up to Utah to a really good skatepark that’s kind of similar to what Japan will be like — and it was like 160 degrees. It was a super dry heat so not humid like Japan will be, but it was something.”

Barratt, who grew up in Hawaii surfing before turning to skateboarding, points to Bucky Lasek and Mimi Knoop as her inspirations. She credits Knoop in particular with getting helping get skateboarding into the Olympics and female skateboarding on par with male skateboarding. “After she finished being a pro skater, she worked at organizations to start getting female skateboarding equal to men skateboarding because it’s such a male-dominated sport. We now have a lot of equal pay, and contests and a lot more opportunities and sponsorships. She’s one of my really, really good friends and just an inspiring person in the sport.”

Even though skateboarding has its roots in Southern California, Barratt knows that the team’s biggest competition will be coming from outside the U.S. “It’s really anyone’s game,” she said. “It’s whoever’s going to be the best prepared mentally. Just where skateboarding is in this day and age is mind-blowing: the Japanese girls are insane. They’re going to probably be one of the biggest competitors. All three of the American females are really, really good. And also, the Brazilians are really good, too.”

But she wouldn’t tip her hand on what special tricks she’s planning to unveil during the Games. “I’m working on a bunch of stuff. I’ll spend the next few weeks preparing to put all my lines together for the tricks that I want to do and have been working on past couple of months. I’m excited to show them to the world.”