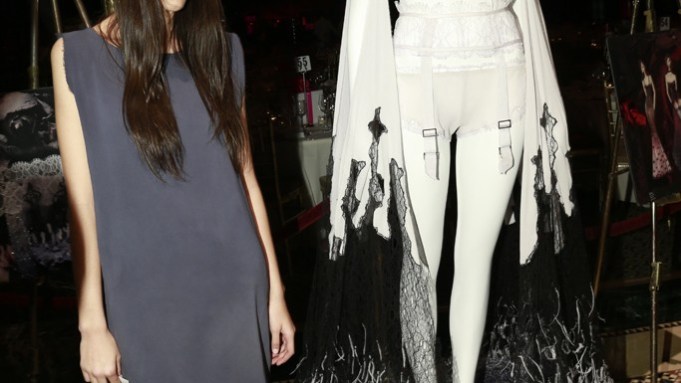 Reflecting the upbeat mood of this week’s fall market, the annual Femmy Awards pulled in a record turnout of 775 guests Tuesday at a cocktail and dinner party at Cipriani 42nd Street in New York.

Staged by The Underfashion Club, a 55-year-old industry organization, the event recognizes and celebrates the achievements of intimate apparel industry leaders worldwide.

In the textiles arena, Andreas Dorner, global marketing director for the business unit of textile fibers at The Lenzing Group, received an award for the Austria-based company, and Gary Schettino, executive vice president and gmm of Hautelook, took home the Innovation Award. Josie Natori, founder and chief executive officer of the Natori Co., was decked out in one of her eveningwear designs to be shown during fashion week. She was bestowed the Lifetime Achievement Award.

The festivities kicked off with the event’s presenter Carson Kressley — best known as one of the stars of the Emmy Award-winning TV series “Queer Eye for the Straight Guy” — who told the audience: “When I walked in the door tonight a man asked, ‘Femmy?’ Well, I’m a little light in my loafers but don’t call me Femmy,” said Kressley, “But I do like my lingerie short and tight, just like the cellulose underwear I’m wearing right now.”

Klein of Bloomingdale’s also took a humourous route, saying, “My husband thought I was going to the Emmys — not the Femmys — and he thought I was getting another job.”

Upon accepting the award for Lenzing, Dorner noted, “It’s interesting how one innovative ingredient like MicroModal [which Lenzing produces] can make such a difference in intimate apparel….I’ve had the pleasure of working with different segments of the apparel industry, but my favorite is intimate apparel because it’s such a spirited industry.”

Schettino of Hautelook, stated, “The flash e-com business is barely five years old and we were at the pivotal edge of that movement. Today, it’s a normal way of doing business and Nordstrom and Hautelook have been on the cutting edge of this movement.”

The Cosabella company was created in 1983 but the team’s efforts came to a brief halt in 1989, when the Cosabella warehouse was dealt a blow from Hurricane Andrew, which flattened the facility. Ever since, cofounder Valeria Campello said the brand’s formula for success has been consistent: “We continue to create quality products but we also bring a lot of fun and fashion colors,” she said.

Ron Frasch, president and chief merchant at Saks Inc., presented the award to Natori. He told the audience that Natori and her husband, Kenneth, are the godparents of his twins and described her as “my best friend.”

“I had no idea 35 years ago that I would be standing here and accepting an award from the president of Saks,” said Natori, wiping away tears. “I was on Wall Street and had become so bored. And today I’m receiving an award from The Underfashion Club. I want to thank the retailers, partners and friends who have been so loyal.”

Kressley lightened up the room with a final comment.

“Oh, that was so sweet. I just wanted to squeeze Ron Frasch. But that’s OK, we’ll do it in the car later,” he gushed.