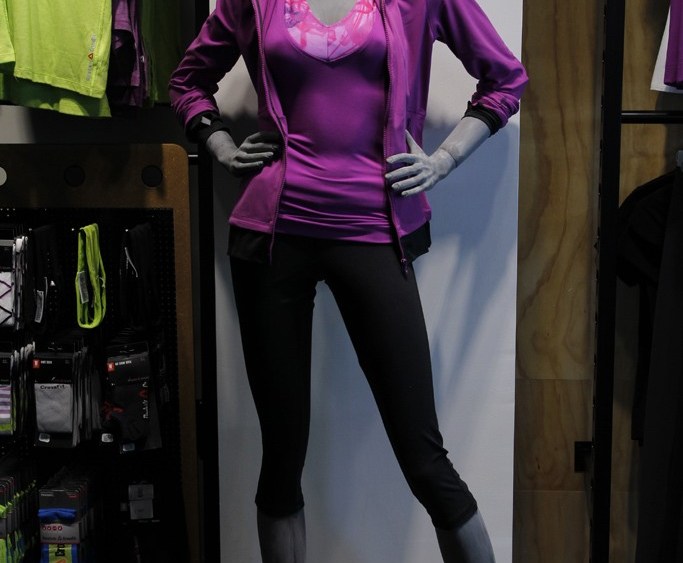 A block-long line of people stood outside the 2,500-square-foot concept store, which sits atop a 10,000-square-foot Reebok CrossFit Box gym. A party atmosphere with a DJ enveloped the store as well as the Box downstairs where Reebok staff — who also are cross fitness experts — prepared for a series of workouts with pull-up rings, floor-to-ceiling ropes and body weight exercises.

The idea of Reebok’s retail-fitness format is to motivate consumers not only to buy Reebok merchandise but to also have a “full Reebok fitness experience that is intended to inspire people to move, train, get fit and have fun doing it,” said Reebok’s chief executive officer Uli Becker. “We see this not as a transactional store but as an experience with the Box.”

“Apple was really in a dirt hole and it took them 10 years to get where they are today. They’ve done it because they have a purpose to the brand….We believe we’ve found our mission in the sporting goods industry. We believe fitness is the sport of the future,” said Becker.

Reebok introduced its Fitness Hub concept at the end of 2011 in Russia and Korea and opened a third location in Dubai earlier this month.

Regarding expansion of Reebok Fitness Hubs in the future, Becker said, “Obviously, we will monitor this over the next couple of months, and we obviously have projects in the pipeline. I believe this concept will play a much bigger role in the future.”

Becker pointed out that experienced cross-fitness-trained staff at the store and gym will be important to the success of the new initiative.

“We have our own wear-testers at Reebok headquarters, but consumers can come to our cross-fit experts at the store for guidance on activity level and advise on fitness and training products,” said Becker, noting that the merchandise mix is skewed to “more fashion for New York City” with a balance of 55 percent women’s products and 45 percent men’s.

Meanwhile, the look of the store can be described as a raw, creative space with a whiteboard promoting upcoming events and a “Fit” desk that anchors the center of the store where cross-fit enthusiasts can learn about Reebok’s newest product technology, or discuss their favorite achievements and training techniques.

Reebok’s partners and owners of the Reebok CrossFit Box gym are Nathan Forster and Michael Alfaro. The Box features a state-of-the-art 130-foot pull-up rig, with a complete offering of CrossFit equipment to cater to a growing member base. Box amenities also include a full locker room and a “recovery center” with a hyperbaric chamber. The sign-up registration fee is $250. Annual or monthly membership fees vary.