Reebok and the UFC Team for ‘Fight Kit’

The UFC will launch its Reebok Fight Kit July 11 in the Octagon during the Jose Aldo vs. Conor McGregor fight in Las Vegas. 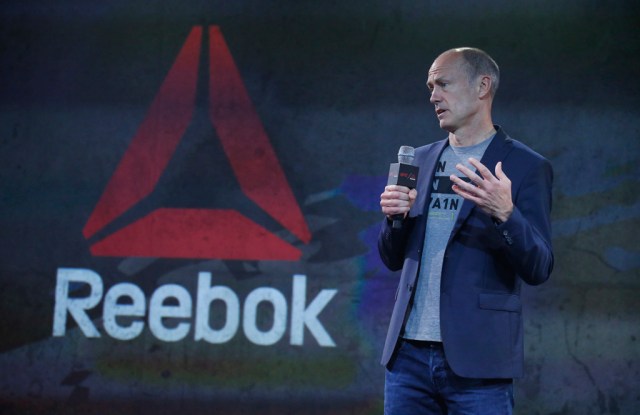 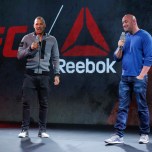 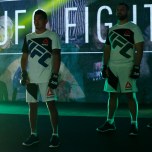 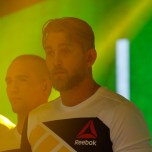 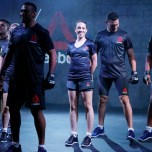 Reebok and the UFC brought out a small army of athletes, a fog machine, bleacher seating and roaming spotlights to unveil the new Reebok “Fight Kit” Tuesday morning at Skylight Studios in Manhattan.

Aside from being a first for the UFC, the event provided a little one-on-one time with mixed martial arts fighters, a group not exactly known for making small talk. Given the UFC’s global fan base of 200 million, there seemed to be as many photographers camped outside on the sidewalk near the media event’s entrance as there were indoors.

Hordes of photographers were both inside and outside the event gunning for face time with Ronda Rousey, Conor McGregor, Robbie Lawler, Rafael dos Anjos, Chris Weidman, Joanna Jedrzejczyk, Fabrício Werdum, Daniel Cormier, T.J. Dillashaw and Demetrious Johnson. While Reebok brass spoke at length about the new high-performance, technical, customized gear, other UFCers-turned-models, such as Rory MacDonald, Johny Hendricks, Miesha Tate, Cain Velasquez, Anthony Pettis and Ronaldo Souza, were more selective with their words. Velasquez vowed to “reclaim” the heavy-weight title he lost and Jedrzejczyk promised a two- to three-week recovery from a recent wrist injury.

Having had to resort to using yoga and running gear in the past to compete in the Octagon, she said, “I have had instances where I’ve actually had to change up what I was doing in a fight to avoid flashing all these people. So I’m really happy that I don’t have that issue anymore.”

Terms of the deal were not revealed, but Reebok president Matt O’Toole told WWD it was more than seven figures and less than eight. “In recent years, Reebok has been going through its transformation of its own. We’ve been going back to our roots in fitness, really inspiring people to move with a laser-sharp focus on this new sport activity, what we call tough fitness,” said O’Toole, noting that the UFC initiative reflects Reebok’s “Be More Human” campaign.

Reebok vice president Todd Krinsky described combat training as “the fastest growing fitness category” and said women account for half of the 35 million people worldwide “who train like fighters.” Forty percent of combat training fans started doing so in the past year, he added.

UFC president Dana White said, “This is a big one for us. Now, like every other sport, we have a major athletic brand behind the UFC producing these kits for the fighters.”

The UFC Fight Kit officially bows at Sports Authority July 7 and at Reebok FitHubs in the U.S. and Canada on July 10. It will be sold at the UFC Fan Expo in Las Vegas July 10 and 11. Developed in three variations, there is the Champion Kit for current champions, the Country Kit with nationality-based colors and badging, and the Universal Kit for all athletes on the roster. The UFC Fight Kit also includes the official UFC walkout jersey, variations of the Octagon short, the Octagon skort, the walkout hoodie, and assorted performance tops for women.

The UFC will launch its Reebok Fight Kit July 11 in the Octagon during the Jose Aldo vs. Conor McGregor fight in Las Vegas. Timed to coincide with International Fight Week, White said, “Everything in Las Vegas is UFC — there are pool parties, concerts, an expo with autograph signings by members of the old UFC and stars of today.”

Afterward, Rousey said she was surprised by how much Reebok’s design team “actually listened” and incorporated her suggestions into the uniform — such as avoiding seams or any grip on the legs due to constant movement. McGregor agreed, noting, “We have been very involved in it. They’ve been very accommodating. A lot of people, me particularly, are picky about the material. They want it to be correct. They listened to what we were saying and they produced quality gear so I’m happy.”

As for what competitors or others might get wrong about him, McGregor said, “I don’t really pay attention to what other people think. I am happy in my little bubble of positivity, and that’s it.” Nor does anything frighten him, “Not particularly, no,” he said.

Rousey is also known to be unbreakable, but she had her own personal reveal after the crowd had thinned. “People forget that I’m the biggest crier ever,” she said. “I cry over everything. If I stub a toe or break an arm, I won’t cry. But if I hear a song at a wrong time or I see a commercial about sad puppies or something like that, I will bust into tears.”