Kiana Anvaripour will be launching her shapewear collection at he retailer's Beverly Hills store. 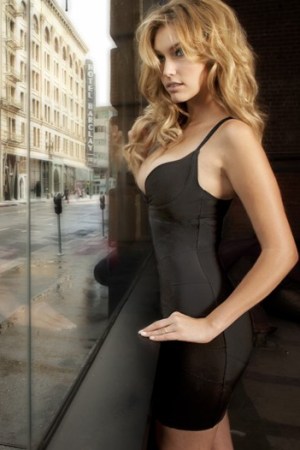 When Los Angeles native Kiana Anvaripour graduated from Otis College of Art and Design in 2003, her student collection earned a spot in the windows of Neiman Marcus Beverly Hills. Eight years later, she will be launching her shapewear collection, ResultWear by d-Mondaine, at the Beverly Hills unit as well as 13 other Neiman’s locations Aug. 1.

Anvaripour, who after graduating worked for eveningwear and lingerie companies such as Madame V in London, was ready to put her technical knowledge to use. Her goal is simple: “I want to help to make women feel beautiful.

“I felt that the shapewear on the market was not really giving any shape to women’s curves. This line is about getting results,” she explained.

The slips feature built-in bra cups with pockets for silicone pads that lift the bosom and create cleavage while power mesh bands are strategically placed to shape and lift the derriere.

The collection is designed for ease of dressing. Bras slip over the head, eliminating crease-causing closures and “back fat;” one slip features a back zipper to facilitate dressing and undressing.

“Shapewear shouldn’t be something you need to hide. I also didn’t want women to have to fight to get into it,” said Anvaripour.

As for the name d-Mondaine, it was created for an alter ego that might exist at the Moulin Rouge.

“It’s someone who eats and drinks and feels good about herself,” she said.

So far, Anvaripour said her shapewear has been worn by Halle Berry, Ginnifer Goodwin and Sofia Vergara.

Available in sizes XS to XL, the black and nude pieces retail from $69 for bras to $159 for full slips. Boutiques such as Madison, Faire Frou Frou and Journelle will also sell ResultWear.

Anvaripour projects first-year wholesale sales of $500,000. She plans to expand into Europe in 2012.