The line is intended to honor the women who have helped propel the growth of the men's activewear brand.

A look from the Rhone women's capsule collection.

After five years selling sophisticated activewear to men, Rhone is taking the plunge into women’s.

But the move should not be viewed as a full-on entry into the women’s arena, its founders stressed. Rather, it’s intended to honor the contributions of the women who work for the company and is being launched during Women’s History Month.

The capsule collection will be offered for sale only on the company’s web site beginning March 2. It will include tanks, hoodies, leggings and joggers created from Italian fabrics treated with the company’s GoldFusion technology, a proprietary process that infuses gold particles into the highest-performing fabrics and is soft, fast-drying, long-lasting and odor neutral. In addition, the leggings are made from sustainable fabrics created from reclaimed and recycled fishing nets removed from the world’s oceans.

Nate Checketts, cofounder, said, “Let me be clear, we are not launching women’s wear. This is an extremely tight, limited capsule collection that really celebrates the women in our lives who have helped propel this brand forward.” Even so, he said he expects the collection to sell out quickly.

Checketts didn’t completely rule out eventually expanding Rhone into women’s wear, but said that if and when he does, it will be after a lot of “patient and intentional” research into the market and Rhone’s place in it. “We only want to lean into things we know we can do well,” he said. “There are a lot of players in the women’s space and we don’t believe in doing something halfway.”

“The last thing the world needs is another black legging,” said cofounder Kyle McClure, who is also chief product officer for Rhone. So the women’s capsule will also have a “voice,” he said. “The genesis of this collection comes from something that has been instrumental to Rhone’s success: the collaboration with and contributions of the extremely talented women in our company. We wanted a collection that celebrates just that with sophisticated and edgy silhouettes married to extraordinary fabrics with a keen sense of design and style.” 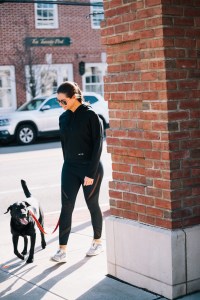 The Rhone women’s line was inspired by the company’s female employees.

The marketing campaign will highlight the power of women and the company will print Virginia Woolf’s quote — “No need to be anybody but oneself” — on the inseams of the garments. Six female Rhone employees will be featured in the campaign reciting quotes from Dr. Maya Angelou’s poem “Phenomenal Woman.” The company has also made a contribution to the Dr. Maya Angelou Foundation to help support educational excellence and health-care equity for all.

“We wanted this collection to feel empowering and I’m honored to lead this project and collaborate with all of the amazing women at Rhone to launch our first women’s capsule,” said Rachel Rozzi, design director. “We designed for the Rhone woman who is dedicated to fitness and comfort and worked tirelessly to perfect the fit and style of this capsule collection without sacrificing quality.”

Rhone is offering women’s wear at a time when the activewear market is under some strain. Last week, Outdoor Voices, which had been among the most popular women’s brands, parted ways with its founder, Ty Haney, as reports surfaced that the brand was losing up to $2 million a month. An interim chief executive officer, Cliff Moskowitz of the investment group Interluxe, was brought in to try to stabilize the business.

At the same time, Mitchell Modell, ceo of Modell’s, said last week that the company will be closing 24 of its 140 or so stores and is considering selling a minority stake in the 130-year-old business as sales continue to be under strain. Even Under Armour, once a high-flying upstart, has experienced major growing pains and is currently in a restructuring mode.

Checketts admitted that the activewear industry is not easy and requires a conservative approach in order to remain profitable and satisfy investors. In 2017, L Catterton, a partnership between Catterton Partners, LVMH Moët Hennessy Louis Vuitton and Groupe Arnault made a significant investment into Rhone, which is believed to have annual sales around $50 million. That followed the $6.2 million raised from a group that included former NFL Network and ESPN executive Steve Bornstein; David Stern, NBA commissioner emeritus; sports personality Ryen Russillo; Shane Battier, former NBA player, and M3 Ventures, an investment fund managed by former CAA executive Martin Dolfi.

In addition to its men’s activewear and commuter collection of technical shirts and pants, Rhone offers accessories and furnishings including underwear. It operates three stores in New York, at Brookfield Place, Hudson Yards, and Times Square, as well as one in Stamford, Conn., at Chelsea Piers. Rhone is also sold in all Equinox locations, at Nordstrom, REI and JackRabbit locations, as well as Peloton Studios, and more than 350 gyms and specialty stores across the country.