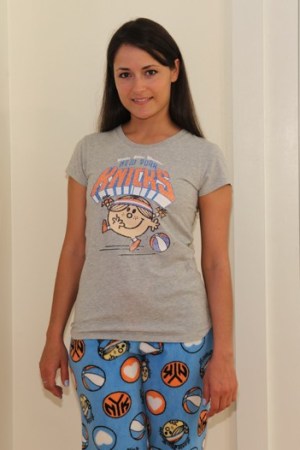 Richard Leeds International has signed a licensing agreement with the NBA and Chorion to produce a collection of sleepwear, loungewear and intimates bearing NBA team names and logos. The deal includes a co-branding contract with the Little Miss and Mr. Men apparel program starring Little Miss Sunshine. London-based Chorion is an international multimedia production company and a licensing agency that represents the NBA.

Distribution will be aimed at mass merchants, sporting goods stores such as Modell’s, junior specialty chains, e-commerce sites and in-arena NBA stores. A majority of deliveries will be timed to coincide with the beginning of the season, with back-to-school selling in September and October, all-star games in February and the April through June playoffs, said Rick Goralnick, senior vice president of licensing and marketing at Leeds.

Robert Traub, senior vice president of licensing for the Americas at Chorion said, “The partnership of Mr. Men and Little Miss with the NBA highlights both brands’ appeal to fashion-conscious young adults. The latest expansion into sleepwear and loungewear hits the target consumer, and we have every confidence that it will be as successful as the apparel range has been.”

Julie McKenzie, vice president of sales at Leeds, said the deal encompasses all NBA teams but will most likely focus on nine major teams: the New York Knicks, the Boston Celtics, the Chicago Bulls, the Miami Heat, the Los Angeles Lakers, the Phoenix Suns, the Oklahoma City Thunder, the Dallas Mavericks and the San Antonio Spurs.

Styles of 100 percent cotton jersey knit for men and women will include logo-printed T-shirts and sleep tops, plush fleece lounge pants and pajama pants, hoodie jackets, shorts and a onesie — an all-in-one pajama. Suggested retail will be $20 for sets, $14.99 for pants, $14 for hoodies, $24 for tops and $29 for the onesie.

A first-year wholesale sales projection for the combined sales for men and women was not available, but sales could exceed $5 million, according to industry sources.

The appeal of the NBA to female consumers is growing. Women in the U.S. play basketball more than any other team sport, and is the top-played sport by 17 percent over the next top sport, which is volleyball, according to NBA data. The NBA’s women’s apparel and accessories business is up 89.5 percent versus 2010 on NBAStore.com. Approximately 46.4 million women viewed games during the 2010-11 regular season, according to the NBA.

Addressing the potential of sports-inspired innerwear, Richard Leeds, chairman of the Leeds company, said, “One of our objectives this year was to increase our licensing base and distribution to young, contemporary specialty chains. It’s very important for our image to show that we are hip and in tune with today’s youth culture. Our new NBA collection is a great way to do that.”