‘Riverdale’ Actress Madelaine Petsch on Her Fabletics Line, the Show and Adjusting to Life in L.A.

The activewear collection will be released on Aug. 1.

If it wasn’t for the pandemic, 25-year-old actress Madelaine Petsch would be in Vancouver shooting The CW’s hit show “Riverdale,” which shut down production of its fourth season in March. Instead, she’s quarantined with her best friend, coping with the realities of the new climate in Los Angeles, where cases have spiked.

“The only thing that I think I’m frustrated by is — and I’m not going to get too political here but — this whole idea that there are people here who are refusing to wear masks, because they don’t think that they should or should have to,” Petsch said over the phone. “My biggest struggle with quarantine is seeing this huge gap between rational and irrational in the world.”

She’s taking it one day at a time, she said, as she’s getting ready to release her first clothing collection, a collaboration with activewear company Fabletics launching on Aug. 1. She began working on the line in August last year, and it was finalized in March, before the impact of the virus was felt.

Originally, the aim was to create workout apparel “that made people excited to go to the gym every day and help instill confidence and excitement in women,” she said. Now, with the pandemic in mind, she also hopes to bring fans motivation “to just get their bodies moving, even just a stretch.”

The actress certainly has an audience, with 20.2 million Instagram followers and 5.74 million YouTube subscribers. She took a break from posting videos on the latter, which she produces, films and edits herself, when the recent Black Lives Matter protests began. 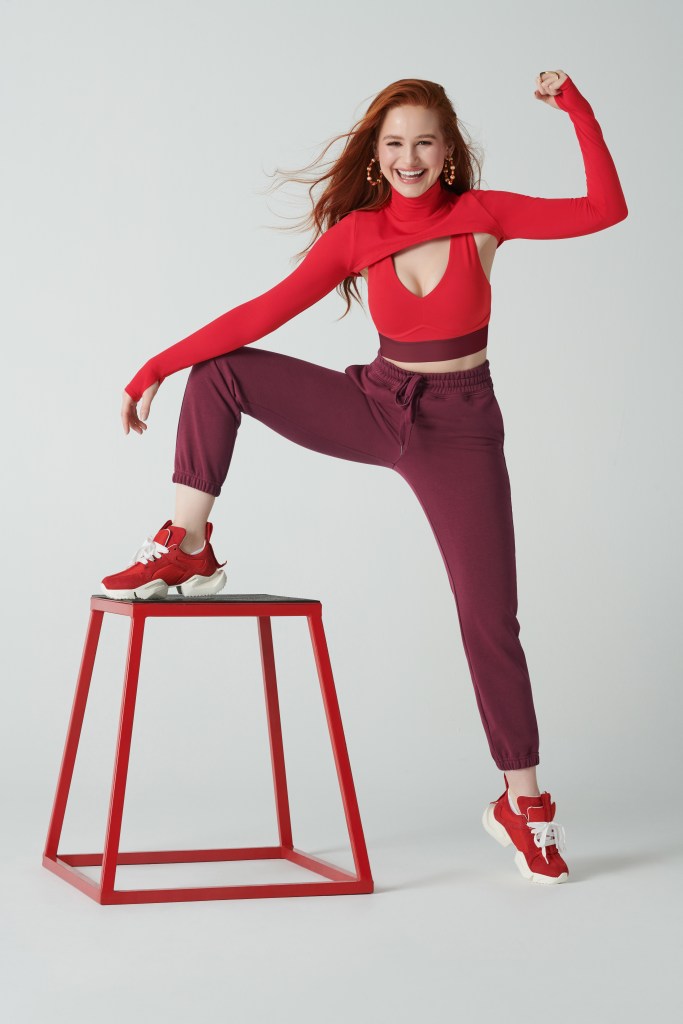 Many of the items in the collection pay tribute to Madelaine Petsch’s “Riverdale” character.  Courtesy of Fabletics

“The minute the world shifted and we started to focus more on the political things happening in the world and equality, I had a really hard time not just focusing on that,” Petsch said. “It felt really ingenuine and not authentic to me to be, like, posting fun YouTube videos when we’re in the middle of a huge civil rights movement. Now that I’m finding a good balance between that and regular stuff, I’m going to start transitioning back into my YouTube channel and maybe in a little more of an educational way.”

She started the account because young viewers of “Riverdale” — a teen drama based on the Archie Comics — mistook Petsch’s own character for the one she portrays on TV: the bold, red-headed and red lipstick wearing Cheryl Blossom.

“A lot of people who watch the show believed that I was actually a b—h in real life, which really, really affected me,” continued Petsch. “It made me really sad, which was silly because I’m playing a character on a TV show.”

The Fabletics collection pays homage to Cheryl Blossom with bright red pieces found throughout the line, which costs between $34.95 for a sports bra to $84.95 for a jacket. Sets start at $69.95 and go up to $149.95. These are the discounted, “VIP” prices given to customers signed up for the brand’s flexible membership program. The company, launched in 2013 by the TechStyle Fashion Group, has more than 2 million members and 46 brick-and-mortar stores nationwide. 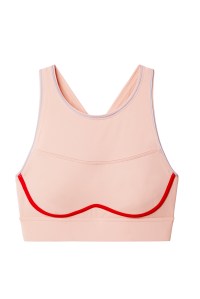 “[The Fabletics team was] so willing to work with me and let me be super hands on, because I’m kind of annoying when I design stuff,” shared Petsch, who previously released a line of sunglasses with eyewear brand Privé Revaux. “Sometimes when you work with companies, you never know if they’re going to expect me to just slap my name on something that they did. You never know when you walk into a brand deal. So I was really happy to hear that they wanted me to have as much input as I wanted, and I wanted all the input.”

She’s been “living in workout apparel and sweats” these days. Her daily routine includes a smoothie, celery juice and neighborhood runs. But wellness to her is a “feeling” and less of “a look or action,” she said.

“It’s about mind, body and soul,” she continued. “Working out plays a huge part in my mental and emotional health, as well as my physical health….As long as you feel good, that’s all that really matters to me. I’m not somebody who’s checking the scale every day or going to the gym to look different or be a smaller size. To me, it’s about the way that I feel about myself when I go and how it helps my mental health and my anxiety.”

She enjoys keeping busy and is looking forward to resuming work on “Riverdale,” she said. For a change, she’ll be playing an adult on the show, which will jump five years into the future in season five.

“I imagine we’ll probably go back soonish to start shooting,” she said. “Hopefully soon. It’s all so up in the air….I think people are really going to enjoy it, because we’re really going to focus on the relationships this year. There’s going to be a lot of twists and turns and some things people may not like as much, but that’s the whole point of the show — to keep people on their toes and entertain them.”