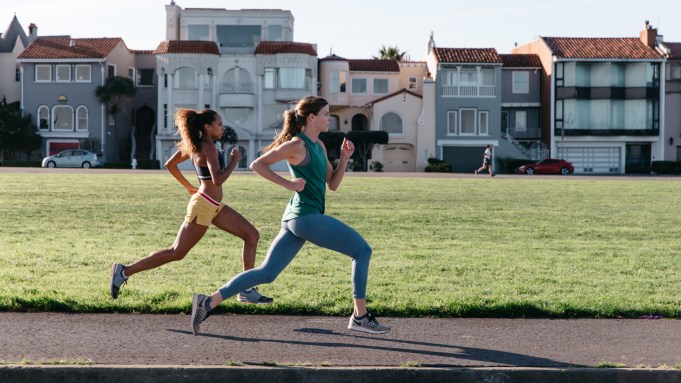 BOSTON — Put a group of runners in Tracksmith singlets, set the phone filter to Noir, and you’ll get an image that could hang with historic shots on the hallowed walls of any elite college or boarding school in New England.

But Tracksmith – co-founded by Yale University runner and former Puma marketing executive Matt Taylor and Luke Scheybeler, the co-creator and creative director of the nostalgia-tinged British cycling brand Rapha, who is no longer involved – is a brand that only looks nostalgic. It’s a technical performance collection that, in 18 months of operation, has proven as harelike as its embroidered logo. Revenues are at nearly $5 million, based on online sales on Tracksmith.com and a five-day pop-up shop. Women’s apparel, which launched after men’s, is about 30 percent of the business.

In April 2015, Pentland Group — which owns Speedo, Ellesse, Mitre and has significant stakes in Hunter Boots and J.D. Sports Fashion Ltd, an 800-unit sports retailer in the U.K. — approached Taylor and became a minority stakeholder. While it currently owns several sports brands, Pentland is perhaps best known for investing in a small, nearly bankrupt New England-based athletic footwear company and turning it into a global, multibillion-dollar powerhouse. That company was Reebok, which is now part of Adidas.

Despite Pentland’s involvement, Tracksmith is clearly a personal vision, one Taylor has nurtured from Yale days when he wrote a business plan for a running magazine. Meter, Tracksmith’s magazine, is now a reality, printed on heavy paper with a yellowish cast and featuring articles on the Penn Relays and Ivy League competitors at Japan’s Izumo race. He envisions Tracksmith as “everything and anything a runner wants or needs.”

“Running is a passion sport,” he said, noting the sport’s steady growth and the rising popularity of both local road races and endurance challenges, like Spartan or Tough Mudder. At Puma, Taylor was the global head of marketing for the running, fitness and training categories; he also spent time at talent agency IMG working on sports management. “Because the mainstream media doesn’t really cover running much beyond the iconic moments of races, if you are into running, by definition you are watching and looking at stuff from the past,” he said.

At the Boston Marathon, to be held April 18, the company will make its biggest marketing push to date. Tracksmith has taken a 2,000-square-foot space at the race finish line on Boylston Street as a showroom/pop-up store/event lounge where it will unveil the Boston Qualifiers collection and a performance short inspired by Roberta “Bobbi” Gibb, the first woman to run the Boston Marathon. In 1966, when Gibb tried to register for the race, organizers said it was unsafe for females. So she hid in the bushes near the starting line and jumped in with the men. For a stretch, she concealed her face with the hood of her brother’s sweatshirt (worn with his rolled-up surf shorts, boys sneakers and her own black tank bathing suit approximating a singlet.) As legend has it, word spread and by the time Gibb ran past all-women Wellesley College, her sweatshirt was off and women were screaming encouragement for her.

In honor of those surf shorts, Tracksmith has crafted the Bobbi short, which retails for $126, a tailored running short of stretch fabric. Proceeds will benefit Gibb’s efforts to put a statue of a woman runner along the marathon course. Gibb will be at the Tracksmith Runner’s Lounge and Event Center during the marathon week.

Beyond the pop-up space, which will remain open for roughly a month, Taylor envisions most of the focus remaining on the brand’s Web site and a few key independent retailers. (He counts brands like Bonobos and Warby Parker, who built their businesses online, as inspirations.) Most of Tracksmith’s apparel is made in the U.S., specifically New Bedford, Fall River and Lawrence, Mass. “Made in Mass., not En Masse,” the Web site reads regarding a pair of $88 Concord running tights. Taylor hopes to be able to use “fully vertical U.S. merino wool — sheep to knitting” from a collaboration with veteran textile executives who’ve produced merino in Australia and New Zealand. He estimates that U.S. merino is “at least” a year off.

Tracksmith has a design team, but a lot of cues come from Taylor’s encyclopedic knowledge of running. Among the company’s bestsellers are its Van Cortlandt singlet, $65. Its diagonal stripe is a nod to the satin victory sash that Cornell University draped across winners starting in the 1880s. The brand’s popular grayboy was inspired by Georgetown’s team-issue shirt. It will be released in custom Boston designs for the marathon, with a women’s tank retailing for $52.

Other details come from closer to home.

“My father-in-law ran track for UConn. His closet is still filled with collegiate stuff,” Taylor said. “I’ve probably raided it a hundred times.”