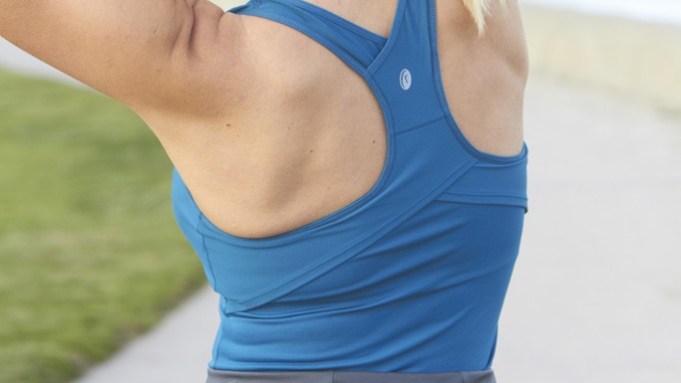 The brand, which specializes in active apparel, T-shirts and casual sportswear, and generates estimated annual wholesale sales of more than $1.4 billion, has largely been sold in the men’s arena. But beginning today, Russell will launch a major women’s initiative on the revamped russellathletic.com/womens e-commerce site.

The women’s line was previewed to consumers in late March at kohls.com to get an early read on which styles consumers liked best. Reaction has been strong to basic silhouettes in a variety of fashion colors, said Kelly Thompson, vice president of advertising and brand management at Russell. Pants are the top-selling item, she said.

Thompson said the goal is to make a major push into the women’s fitness market with the 18-piece branded collection.

“We want to be competitive with the Champions of the world,” said Thompson. “We’ll also be making a big digital push with well-known bloggers and paper-clip programs [digital search engines] to drive everything to our Web site, and we’ll be launching a Facebook page because we want to have conversations with women….Price is very important, and we’ll be competitive with Champion. We want to deliver the same quality as Champion but at a great value.”

Styles include fleece hoodies, active skorts and capris, and performance racer-back tops with built-in sports bras designed by sister company Vanity Fair Intimates. Full-support cami sizing ranges S to XXL with bra cup sizes 32B and 34A to 40B and 38C. Colors include bright shades of pink, teal, jade green, orchid and orange.

Thompson noted that market research was critical in addressing the needs and preferences of consumers who buy fitness apparel.

“We did a big segmentation study that told us who the consumer is and what she is shopping for in athletic apparel. She’s typically in her mid-30s and affluent. Russell Athletic is for the soccer mom or the woman who’s running a 5-k,” explained Thompson. “The category has changed over the past five years. Before, it was more workoutwear. Now it’s a lifestyle category.”

Sarah Gholston, vice president of design and merchandising, said balancing fitness with an active lifestyle was key in creating the collection.

“The line was designed by women for women and inspired by the quintessential mom-on-the-go….Color has been very important, and we have a lot of brights and jewel tones, as well as prints, so you can get a little pop of color. We try to create a slimming effect in everything we do, through inserts, color mixing and fabric mixing,” commented Gholston.

Fabrications include performance blends of polyester and spandex, jersey knits and a Dri-Power 360 line of cotton and rayon blended with organic jute. Dri-Power is a proprietary moisture-wicking application.

“We are trying to use as many organic blends as possible, and use anything that’s been recycled,” said Gholston. She added that the fall collection will be expanded to include additional fleece and layering pieces, as well as updated fashion colors.

“We’ve talked about sports bras. It will be a natural progression for us,” she said.

The sports bra business is a fast-growing segment of activewear.

Sports bra sales in the U.S. increased 27.4 percent to $783 million of total women’s activewear sales of $14.49 billion in the 12 months ended December 2011, according to The NPD Group Inc.’s Consumer Tracking Service.