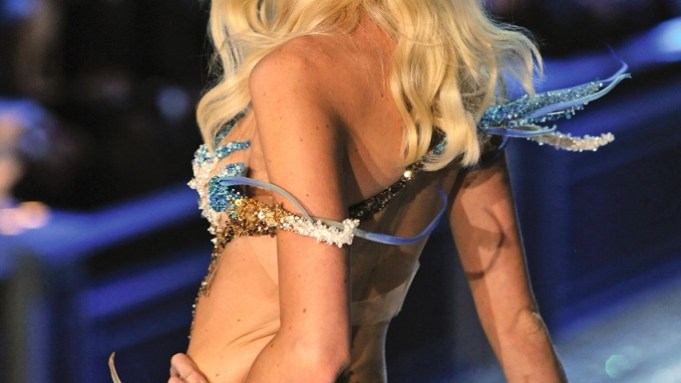 NEW YORK — The aftermath of Hurricane Sandy will impact a number of events and fashion shows and presentations scheduled during this week’s fall-transitional 2013 innerwear market.

But it appears the show will go on for one major player: Victoria’s Secret.

Despite ongoing power outages in Manhattan, the lingerie powerhouse plans to send its Angels out on the runway for its annual fashion extravaganza on Wednesday at the 69th Regiment Armory with the help of a fleet of generators, said a spokeswoman. Victoria’s Secret rents the generators by the month and the company is lending their use to the National Guard in the wake of the disaster.

The spokeswoman said Friday that entertainers Rihanna, Justin Bieber and Bruno Mars are still scheduled to perform at the 4 p.m. and 8 p.m. shows.

It was unclear if an after party would still take place at Finale, a new club at Bowery and Spring Streets in Manhattan.

“There will be an after party….The whole team is working very hard to make the show and after party happen, and that speaks to the resilience of New Yorkers, which is very impressive,” said the spokeswoman.

Here, an update on several events and fashion presentations this week:

• The launch party on Monday for “Josie and the Dragon,” a new book by Josie Natori that celebrates the 35th anniversary of the Natori Co., has been canceled. The party was to have taken place at Openhouse Mulberry, an art gallery at 201 Mulberry Street in Manhattan. A later date is being planned.

However, a second “Josie and the Dragon” fete is on schedule in the Natori ready-to-wear boutique at the Saks Fifth Avenue flagship on Wednesday.

• A seminar on Monday hosted by the Intimate Apparel Council and the American Apparel & Footwear Association titled an “Innovative Peek at Intimate Apparel” has been canceled. The seminar at the Union League Club was to have been presented by Ken Walker, operating partner of innovation at Marvin Traub Associates.

• The annual HUG cocktail and dinner party will take place Wednesday at the 230 Fifth Avenue Penthouse.

• The Eres presentation at the Standard East Hotel, which was scheduled for Wednesday, has been canceled. Eres officials will have another location by mid-November.

• A cocktail party for retailers on Wednesday to celebrate the launch of the new Unbelievable Unwire bra by Warner’s at the Helen Mills event space loft has been canceled. Officials at Warnaco Group will reschedule the party in February.

A press day at the loft for the launch is still on Wednesday from 9 a.m. to 5 p.m.

Meanwhile, innerwear companies are expected to continue coping with logistical problems in the wake of the hurricane at this week’s market. A number of executives could not be reached Friday and a majority of showrooms along Madison Avenue were shuttered last week due to power outages and transportation problems. By late Friday, it was apparent that appointments with out-of-town retailers from major stores as well as specialty boutiques were being moved to the following week, or later.

Executives, including Charles Komar, chief executive officer of the Komar firm, which also owns the Carole Hochman Design Group, acknowledged that a number of retailers had canceled appointments this week with some rescheduling for the following week. The stores include Nordstrom, J.C. Penney, Bon-Ton, Van Maur, Fred Meyer, Hautelook and Boutique Fashions.