Cheeky boudoir looks, including designs from Aubade and Mimi Holliday, were high on lingerie buyers’ wish lists for fall 2015. 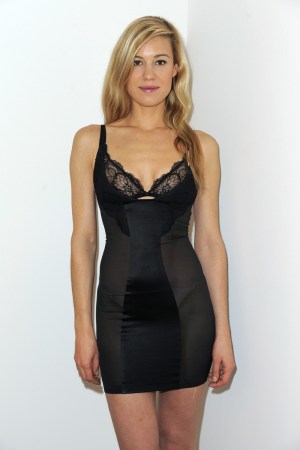 Differentiation continued to be one of the major factors attracting buyers, who cited sexier boudoir looks and silk — a focus for both SIL and sister fabric fair Interfilière, which ran Jan 24 to 26 — as key trends.

“We’re noticing a lot of peekaboo, open bottoms, side ties…cheekiness,” said Allison Beale, marketing director of Journelle, who was on the lookout for new brands. “We’re experiencing continued growth, so our budgets are increasing.”

Melissa Thomason, owner of South Carolina-based Breakout Bras, said customers are looking for special, luxurious-looking pieces and that the offer on show was “more on target with what our customer wants.”

Looks from Mimi Holliday, Maison Close and Aubade were cited as particularly high on retailers’ wish lists, and vendors praised sexier looks from mainstream brands, while an edgy punk vibe was visible at many stands.

Chantal Thomass offered the Boyish theme, inspired by perfecto jackets, with a bra priced at 200 euros retail, or $226 at current exchange, while collections from Wolf Lingerie and Simone Pérèle put a tattoolike spin on designs.

For example, Pérèle’s Look line, with wholesale prices for a bra in the range of $50 to $55, featured embroideries that looked to be tattooed onto the skin through a nude tulle background.

Designers were also looking farther afield for inspiration, with celestial motifs visible on several stands. U.K.-based Mimi Holliday offered the Deadly Nightshade line with blue stars embroidered onto black tulle, priced from 11 pounds to 30 pounds wholesale, or $16.63 to $45.35, while in a more subtle register, Empreinte’s Cassiopée in Sophie Hallette lace was inspired by constellation gazing, with a bra priced around 38 euros wholesale, or $43.

With the “50 Shades of Grey” movie out in February, the franchise’s influence on lingerie looks set to continue. “People are experimenting much more,” said Sarah Jenkins, head of public relations and marketing at Mimi Holliday.

As to the color palette, the offer was more muted than in recent seasons, with lots of champagne, dusty-pink and frosted-chestnut shades, and this applied to the offer at Interfilière, too, which showcased fabrics and trims for spring 2016.

“It’s more dusty, pretty neutral,” said La Senza associate vice president of design Brook Skinner. “It’s not resonating for me,” she added, although she said that price points were good for U.S. buyers, given the weak euro.

Other buyers praised a return to basics. “Basic is back, with a lot of pale colors, and comfortable things are in,” said Astrid Tjensvold, owner of Dick & Daisy, in Stavanger, Norway.

New developments in the segment included U.K.-based Nubian Skin, which offers nude lingerie and hosiery in a wide range of skin tones.

There were developments in shapewear, too, with heavyweight Wacoal moving toward an increasingly sophisticated — and sexy — offer with its Vision line made from stretch tulle and satin-finish panels with appliquéd lace details.

Brands were also keen to offer broader lines, giving retailers — and consumers — more opportunities to mix and match within a range with both plain and embellished pieces.

Exhibition organizer Eurovet did not release visitor numbers for SIL and Interfilière, but said that at the former, attendance from France, Italy and the U.K. saw a slight drop, and that there was a 40 percent decline from Russia.

Increases were seen from the Middle East, Australia and the U.S., as well as 10 percent growth in e-tailer attendance, and most major brands reported brisk traffic at the three-day event. Interfilière saw brand visitor numbers increase 3 percent, although specialized retailer attendance dipped 5 percent.

Amazon Fashion manager of new business Aimee Gabrielle Carroll was attending for the first time. “We have seen a strong response from our customers in the intimate-apparel category,” she said. “Because we know what they are looking for — in terms of trends, styles and fit — our goal is to find new and exciting brands.”

While the lingerie market in most of Europe remains stagnant, most executives cited strong performance in English-speaking markets and sharp declines in Russia.

“Russia was a very big market; they have that sensitivity to lingerie,” said Chantal Thomass. “We were intending to open boutiques there, but that is on standby. Even in Paris, a lot less Russians are visiting our stores.”

Claire Masson, brand director for Aubade, owned by Swiss firm Calida Group, said the brand’s sales for 2014 were roughly flat and that 2015 is already off to a difficult start.

“Since the beginning of January, it has been tough, with the recent terrorist attacks and the economic context. Russia and Ukraine are difficult, and we need to be really attentive to Switzerland because of currency parity.”

She highlighted that the French lingerie market, the brand’s largest, saw a 1.5 percent sales decline last year, according to IFM data, and that average per capita spending figures had dipped for the first time, to 98.6 euros, or $111.88, a 0.8 percent drop.