Zimmermann Expands Beyond the Bikini

Zimmermann, the Australian label known for festive swimwear, makes a splash on the American retail scene. 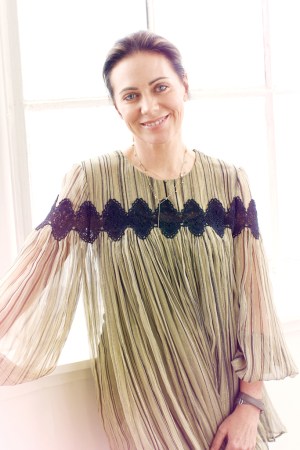 The average American shopper familiar with the Australian line Zimmermann most likely associates it with kookily charming swimsuits that don’t really look like swimsuits, such as the ice-blue one-piece “Seer” style that features an elaborately embroidered silver star pattern, swirls of ruffles and panels of polka dot mesh around the underwire cups. Fit for a 21st-century Esther Williams, the Seer is currently on sale at Net-a-porter for $785.

“We think of it as beach-to-bar lifestyle, it’s not just a swimsuit to us,” said Simone Zimmermann, the label’s chief operating officer, who founded the Sydney-based label with her sister Nicky, the chief designer and creative director. There are tamer, more traditional styles, too, like bandeaux and string bikinis in wild leopard prints and paisleys, all of which have made a splash for Zimmermann, which is spiking its U.S. profile.

Two weeks ago, the Surf Lodge, the Montauk madhouse and epicenter of the East End summer scene, hosted a big party to celebrate its collaboration with Zimmermann on its summer staff uniforms. Solange Knowles DJ’d. Zimmermann already has a presence in the Hamptons, having opened an East Hampton store last summer that stays open year-round, unlike many of its neighbors.

During the first week of July, the brand will open a 3,000-square-foot store on Melrose Place — the enclave of luxury stores that offshoots Melrose Avenue in Los Angeles — as well as a store in the Americana Manhasset, putting Zimmermann’s U.S. retail network at five stand-alone stores, including Robertson Boulevard, which opened in L.A. in 2011 and Mercer Street in New York, 2012. Those are big retail positions for a relatively under-the-radar, independent brand best known for wacky swimsuits — at least in the U.S.

“I think [in the U.S.] that would most definitely be the general opinion,” said Nicky Zimmermann, concurring that swimwear has put her label on the international map, last week during the presentation of her resort collection in an airy, light-filled loft at Canoe Studios in New York. That Zimmermann is a swimwear brand, and a new-ish one, is a misconception. Nicky and Simone launched the collection with full ready-to-wear in 1991 in Australia, where Zimmermann is a household name. They have 16 stores there, which is a lot considering the small, densely located population. As Nicky put it, “There’s hardly a young girl who wouldn’t have something that we’ve made over the years.”

Scaling a global fashion business with novelty swimwear as the engine, or at least the bait, is a curious business model. Nicky and Simone say that rtw makes up the majority of the business, but swim has often been the introduction point. For five years, the label was solely rtw, with Nicky designing bohemian dresses and beachy pieces in line with the current aesthetic of a tasteful, dressed-up, less generic version of a Coachella babe.

Swimwear was a lightbulb moment. “Most fashion people say things like this: ‘We started doing it because we thought it wasn’t around,’ but 25 years ago [fashion swimwear] really actually wasn’t,” said Nicky. “That was a driving point for us and we also thought it was something that would have international appeal coming from Australia.” Given the beach culture, they were right.

Zimmermann began wholesaling in the U.S. 20 years ago, and always had good performance. It’s carried at 200 retailers worldwide, including Saks Fifth Avenue, Barneys New York, Net-a-porter and Shopbop. A turning point came when they decided to sell a few styles through the Victoria’s Secret catalogue of yore, the soft-focus underwear and swim special that featured more than just VS merch. “That was really an indication for Simone and me,” said Nicky. “‘Oh my gosh, there’s a lot of opportunity here for us.’ It wasn’t even styles that I loved, but they killed it.’”

They did a pop-up shop in 2010 on Greene Street in SoHo, where the Stella McCartney store currently is, and exceeded expectations. “It was like, wow,” said Nicky. “We just opened our doors and we sold.” The next year, they opened on Roberston Boulevard, the following year on Mercer Street. After two decades of showing locally at Australian Fashion Week, Zimmermann moved to the New York schedule in 2013 to signal its ambitions as a global brand, which remains family-owned. Nicky’s husband Chris Olliver is the chief executive officer. The company does not disclose sales figures.

The new Melrose Place store, designed by Don McQualter, is the largest in Zimmermann’s retail network, which is quite robust and impressive compared to that of other American labels of its size.

“Simone and I had four retail stores within the first five years of our business,” said Nicky. “That was always very obvious to us. You make money and continue a business by selling things.” Before Zimmermann opened its own stores, Nicky was selling the collection herself in Paddington Market in Australia, which she likens to Portobello Road in London. The retail experience gained in Australia put Zimmermann at a distinct advantage when entering the U.S. market. Simone said a Miami location is on the list and Nicky cited opportunities in Los Angeles, such as Venice and nearby Orange County.

The stores have been instrumental in raising the brand’s profile beyond swim. The majority of the business is done by rtw, the bulk of which can be classified as occasion dressing. Want a dress to stand out at a summer wedding? Come on down. Dresses fall in the $600 to $800 range. For lack of a better word, the collection has a bohemian, warm-weather affiliation it doesn’t fully shed, even in winter. There are coats, flare-leg jeans and boots for fall, but part of the beauty of Zimmermann is that shoppers can find swimsuits, sandals and beach attire all year. “We’ll never be known as a coat brand,” said Nicky. “Winter girls come and buy from us in different ways. They buy a dress and wear it with tights or they’re traveling. You can always find something from us to wear as a resort piece. And swimwear is in the store 12 months a year.”