The first store in New York is slated to open in early 2014 and plans include a capsule collection of soft, contemporary clothing for fall 2013. 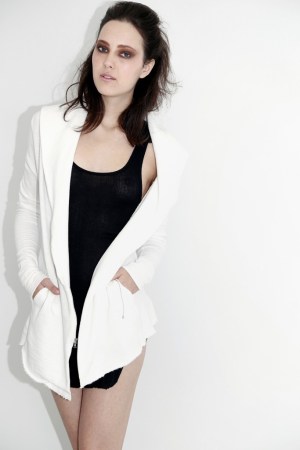 High-end loungewear brand Skin is expanding its retail presence in the global marketplace.

The first Skin store in New York is slated to open in early 2014 and plans include a capsule collection of soft, contemporary clothing for fall 2013 and the company is in discussions for a men’s innerwear license.

The trendy brand — known for its serene, Zen-like styles of layered soft separates that can be worn at home or as casual sportswear and ready-to-wear — was relaunched in August 2012 following a partnership with a private investment group that provided a multimillion-dollar cash infusion.

The strategy is to turn Skin into a megabrand that provides “total comfort” to consumers, whether it’s a pair of organic pima cotton undies that have a silklike finish, an easy, soft chemise that doubles as a dress, or a modernistic lounge gown that can be worn as eveningwear, said Susan Beischel, president, designer and creative director.

Ken Sitomer, chief executive officer of Skin and a partner in the investment group, said the strategy of simple, elegant and purist design is paying off for the brand. A wholesale sales estimate was not available, but Sitomer said sales are “on track” with the business plan.

Interest from major retailers has also bolstered the Skin brand.

“We changed factories in Peru and put some new relationships in place so we can do exclusive collaborations for Barneys [New York] and collections for Neiman Marcus, and at the same time, make sure shipping is on time,” explained Sitomer.

In 2012, Skin introduced an exclusive line of Organic Undies of pima cotton for Barneys, which included a thong, boyshort and tank in fashion colors like lavender, creamsicle and Robin’s egg blue, as well as an exclusive line of T-shirts, sweatshirts and pants called On the Go for Neiman’s.

“A lot of increase in volume has come from the replenishment program,” said Beischel.