Skin Gears Up for Growth

The 11-year-old women’s sleepwear and ready-to-wear brand is looking to new categories and licensing opportunities to fuel its expansion. 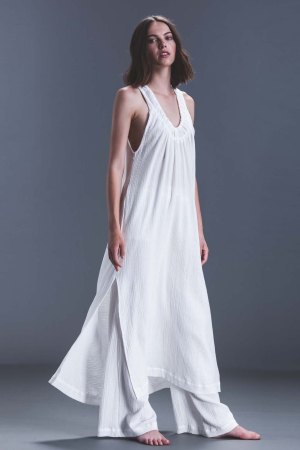 When Susan Beischel launched Skin in 2003, there wasn’t much fashion-focused competition in the high-end sleep and loungewear field. Now the market is flooded with brands targeting yoga-pant-wearing customers who live by the philosophy Beischel started pushing more than a decade ago.

“When I met Susan, she said ‘my merchandise can be worn for breakfast, lunch and dinner and a few pieces can be worn for black-tie or red carpet,’” said Ken Sitomer, Skin’s chief executive officer who invested in the business in 2011. “I just needed pieces that were comfortable, simple and worked,” added Beischel.

Beischel’s ethos hasn’t changed, but the New York City-based brand, which is sold globally at retailers including Selfridges, Barneys New York, Net-a-porter, Nordstrom, Neiman Marcus and Saks Fifth Avenue, is making small tweaks to adapt to the lounge-heavy market and position itself for development.

Its first area of focus is its ready-to-wear line, which launched exclusively with Barneys in 2013.

“The brand has always been a day-to-night brand, and now the opportunity is to define more sharply the distinctions between the two divisions. This has definitely enhanced the sales of sleepwear,” said Beischel, who added that Skin grew by 35 percent last year.

Beischel told WWD that activewear is not a primary focus, but for the sleep assortment, she’s introduced a bralette and panty program made from organic cotton and Lycra that features a sporty Skin logo on an elastic band, which is a first for the brand. The sleep and lingerie collection ranges from kimono robes that sell for $175 to chemises that retail for $98.

While both the sleep and apparel lines are made in Peru, Beischel is assessing new factories and pricing along with licensing opportunities. She’s interested in extensions including fragrance, cosmetics, body products, home items, women’s accessories and footwear along with men’s lounge and swimwear.

“The biggest challenge is keeping up with the growth and staying on point with clear brand messaging,” Beischel said. “We’re trying to find the balance between emotional and commercial.”